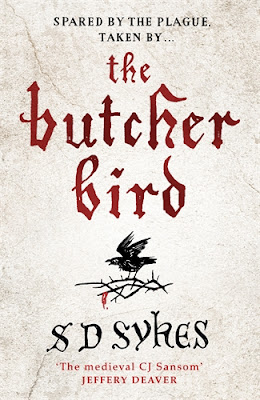 Oswald de Lacy is growing up fast in his new position as Lord of Somershill Manor. The Black Death changed many things, and just as it took away his father and elder brothers, leaving Oswald to be recalled from the monastery where he expected to spend his life, so it has taken many of his villagers and servants. However, there is still the same amount of work to be done in the farms and fields, and the few people left to do it think they should be paid more - something the King himself has forbidden. Just as anger begins to spread, the story of the Butcher Bird takes flight. People claim to have witnessed a huge creature in the skies. A new-born baby is found impaled on a thorn bush. And then more children disappear. Convinced the bird is just a superstitious rumour, Oswald must discover what is really happening. He can expect no help from his snobbish mother and his scheming sister Clemence, who is determined to protect her own child, but happy to neglect her step-daughters. From the plague-ruined villages of Kent to the thief-infested streets of London and the luxurious bedchamber of a bewitching lady, Oswald's journey is full of danger, dark intrigue and shocking revelations.

There is something so beautifully accurate about The Butcher Bird that travelling back in time to the autumn of 1351 feels perfectly realistic and totally reminiscent of imagined medieval life.

Oswald de Lacy, the new Lord of Sumershill Manor, is charged with investigating the mysterious death of a new born infant who has been found impaled on a thorn bush tree. The superstitious simplicity of the villagers who live and work within the demesne of the Manor are convinced that the mysterious and deadly Butcher Bird is to blame. Oswald has great difficulty in persuading the villagers that their superstition has no basis in truth, and in his quest to determine who, or what is blighting the village, Oswald must overcome huge prejudice. What then follows is a creative and well plotted historical mystery, which uses as its focuses the plight of those who have been affected by poverty and disease.

I was completely captivated by The Butcher Bird and although I haven't read the first book in the series, that really didn't matter, as I very quickly, thanks to the author's great story telling skill, soon devoured the story, with ease. The medieval world comes alive in all its gruesome glory. The sights, sounds, and yes, quite frankly, the smells - “a stench of wholly new proportions” - of medieval England, are so vividly described that I became totally immersed in fourteenth century life, so much so, I had to keep looking up, whilst reading, in order to reassure myself that I was actually still present in the 21st century. And yet, it's not just a story about medieval superstition; it's also a young man’s quest to find his own identity, of righting a grave wrongdoing, and of the portrayal of ordinary family life, with all its ups and downs, something which is as relevant today, as it was back in the fourteenth century.

There is no doubt that this story is from an author who has a distinctly authentic voice. Her love of writing and history shines through with every well written word, and the enthusiasm and commitment to the story, and the comfortable way in which she brings history alive, make The Butcher Bird an absolute joy to read.

I feel sure that we are only just at the beginning of Oswald de Lacy's intrepid journey. And whilst I'm waiting for book three, I will definitely be catching up with the first book, Plague Land. 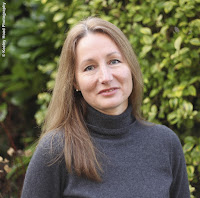 SD Sykes lives in Kent with her family and various animals. She has done everything from professional dog-walking to co-founding her own successful business. She is a graduate from Manchester University and has an MA in Writing from Sheffield Hallam. She attended the novel writing course at literary agents Curtis Brown where she was inspired to finish her first novel. She has also written for radio and has developed screenplays with Arts Council funding. 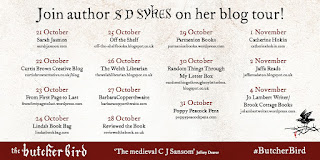 My thanks to S D Sykes and publishers Hodder & Stoughton for their kind invitation to be part of this exciting blog tour.