Devastated by a recent pandemic brought in by outsiders, the villagers of Blackrig in the Scottish Highlands are outraged when they find that the nearby estate plans to reopen its luxury ‘party house’ to tourists.
As animosity sparks amongst the locals, part of the property is damaged and, in the ensuing chaos, the body of a young girl is found in the wreck. Seventeen-year-old Ailsa Cummings went missing five years ago, never to be seen again – until now.
The excavation of Ailsa’s remains ignites old suspicions cast on the men of this small community, including Greg, the estate’s gamekeeper. At the beginning of a burgeoning relationship with a new lover, Joanne, Greg is loath to discuss old wounds. Frightened by Greg’s reaction to the missing girl’s discovery, Joanne begins to doubt how well she knows this new man in her life. Then again, he’s not the only one with secrets in their volatile relationship..
📖 My review..
During the recent pandemic, the villagers of Blackrig became understandably suspicious of tourists who visit their beautiful corner of the Scottish Highlands. However, with the easing of restrictions, plans are in motion to reopen the local hunting and shooting estate, bringing another set of tourists to the aptly named Party House. Greg Taylor is the estate ghillie and on a trip down to London to promote An Druim Dubh, Greg meets Joanne, a journalist and blogger. The attraction between Greg and Joanne is instant and passionate and Greg is delighted when Joanne accepts his invitation to stay with him in the Highlands. However, Joanne has her own agenda for travelling to Blackrig, a stay which is made all the more complicated when the startling discovery of a young woman's body is made on the eve of The Party House reopening.
What then follows is a cleverly thought out psychological thriller which has all the elements of a good cat and mouse chase. The villagers of Blackrig have good reason to fear strangers and the opening up of a murder investigation naturally causes tempers to fray and emotions to run high. The tension is pulled tight throughout the story and there are several twists, turns and red herrings which all add a sinister edginess to the story. The Party House itself soon becomes another character in the novel. Its secluded position, deep in the woods, with the beautiful emerald lochan close by, all add to the brooding sense of atmosphere. I enjoyed the post-pandemic setting of the novel and felt that this added to the sense of suspicion and the wariness of locals towards tourists. The murder mystery is naturally at the centre of the novel and I enjoyed fitting together all the pieces of this complicated puzzle.
The Party House is a change of direction for Lin Anderson who is perhaps best known for her very successful Rhona Macleod series of crime novels. I have really enjoyed this foray into psychological thriller territory and I do hope we see more of this genre from this talented writer.
🍺Best read with..a wee dram of good Scotch whisky
About the Author 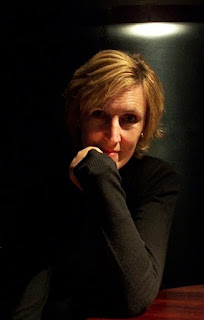 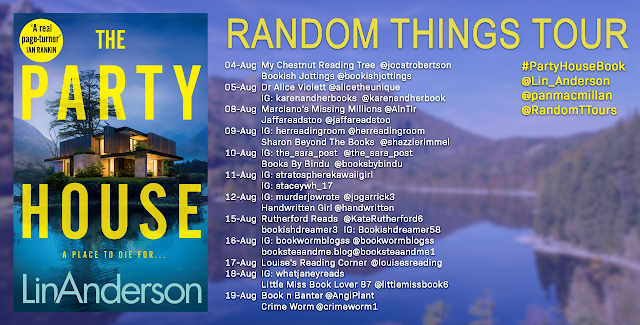