Follow the much-loved characters from the award winning MOTHER’S DAY CLUB in a brand-new World War Two saga series.
October 1940
When VAD nurse Evie narrowly avoids being killed in an air raid during the Blitz, it propels her to make a life-changing decision to break free of her troubled and unhappy life. She escapes to the Norfolk countryside to start afresh, with a job at the newly opened Great Plumstead Hall hospital, and a wonderful new home at Rookery House.
The community of Great Plumstead welcomes more evacuees to the village – mothers and children bombed out of their London homes. Sisters Prue and Thea, along with members of The Mother’s Day Club, help the new arrivals settle in, while continuing their work for the war effort by holding knitting bees, socials and doing WVS work.
Evie is happy in her new life – she loves living at Rookery House and enjoys her job at the hospital, despite working for the difficult Matron Reed. But when a patient arrives who knew her in her former life, Evie’s new-found freedom and happiness is in danger. Will the secrets of Evie’s past be revealed, and the problems from her old life return to trouble her once more?

Those who have read The Mother's Day Club will be delighted to see the return of old friends who reappear in this new WW2 saga which features characters, both old and new, who call Rookery House in Great Plumstead home.

A Wartime Welcome at Rookery House highlights this fictional village who welcome people who are in need of respite from the cares and worries of the war, especially for those evacuees who have been living in London, facing the ever present danger of falling bombs. Evie Jones is a nurse with a mysterious past who escapes to Great Plumstead by taking up a VAD nursing position at the newly opened Great Plumstead Hall hospital and finding a billet with Thea, Marianne, Reuben and Hettie at Rookery Hall is a dream come true for her.

As always the villagers are keeping the home fires burning, getting involved in knitting groups and social activities, recycling waste and planting vegetables but it is their warm welcome to troubled strangers where the story finds its heart. Soldiers who have been wounded in the war find comfort and solace in Great Plumstead Hall Hospital and this part of the story, especially Evie's role there makes for interesting reading. Mothers and  their children from London also make their way to the peace of Great Plumstead, but country life is not for everyone and even though some of the mothers have really difficult decisions to make they are always supported by Thea at Rookery House.

A Wartime Welcome at Rookery House is a lovely introduction to this new WW2 series. The characters are beautifully described, quickly becoming as familiar as old friends and there is a genuine wartime authenticity which makes the story such a delightful read. I'm looking forward to seeing what comes next for the people who live at Rookery House. Rosie Hendry lives by the sea in North Norfolk with her husband and children. She writes uplifting, heart-warming historical fiction based on true events from our social history. Listening to her father’s tales of life during the Second World War sparked her interest in this period and she loves researching further, seeking out gems of real-life stories which inspire her writing.
Twitter @hendry_rosie #AWartimeWelcomeAtRookeryHouse
Facebook
Instagram
Amazon UK
@rararesources 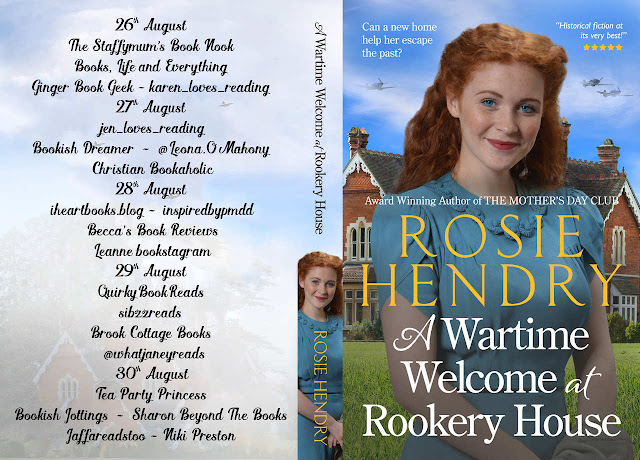