Protected by The Beast

Undone by the man

Racing cross country pursued by danger, widow Lady Ellena Swein isn’t pleased to be taken back to her father’s castle. But with his knight Sir Braedan Leofri, also known as The Beast, as her captor, she has little choice! Ellena is surprised by his honourable and protective nature, even if she shouldn’t trust him. And when all seems to conspire against them, Braedan’s secret could either extinguish the spark between them or make it burn brighter.

Despite her objection, newly widowed, Lady Ellena Swein is being escorted back to her father's castle. Sir Braedan Leofric's, reputation as a dangerous warrior goes before him, nicknamed 'The Beast', he has been charged with delivering Lady Swein back into her father's safekeeping, however, the road back to Ogmore Castle is fraught with danger, a danger which will test both Ellena and Braedan to their absolute limit of endurance.

What then follows is an entertaining historical romp which has all the necessary ingredients for a lively medieval adventure. There's danger aplenty for Ellena as she is pursued across country, and Braedan has to keep his considerable wits about him in order to keep them both safe from those dastardly enemies who seek to do them harm.

This is the author's debut historical romance/adventure and I feel that she has the balance between excitement, danger and passion absolutely spot on. There's an authentic historical feel to the story and more than enough thrills and spills to keep you turning the pages. Of course, there is also the added attraction of a passionate romance and The Warrior Knight and the Widow certainly sizzles with an undercurrent of forbidden and illicit attraction between the high born lady and the fierce-some warrior, with his hidden heart of gold.

I enjoyed getting to know both of these characters who each have their own faults and failings but when up against the worst that can happen both Ellena and Braedan prove themselves to be strong and forceful personalities.

In this current troubling time, I need to read stories which take me to anther time and place, and I found so much to enjoy in reading The Warrior Knight and the Widow that I read the whole book in one delightful sitting. 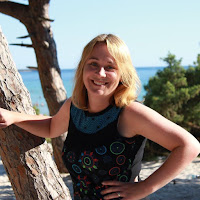 Ella Matthews lives and works in beautiful South Wales, When not thinking about handsome heroes she can be found walking the coast with her husband and their two children ( probably still thinking about heroes but at least pretending to be interested in everyone else)

The winner will be selected at random via Rafflecopter from all valid entries and will be notified by Twitter and/or email. If no response is received within 7 days then Rachel’s Random Resources reserves the right to select an alternative winner. Open to all entrants aged 18 or over. Any personal data given as part of the competition entry is used for this purpose only and will not be shared with third parties, with the exception of the winners’ information. This will passed to the giveaway organiser and used only for fulfilment of the prize, after which time Rachel's Random Resources will delete the data. I am not responsible for delivery of the prize. 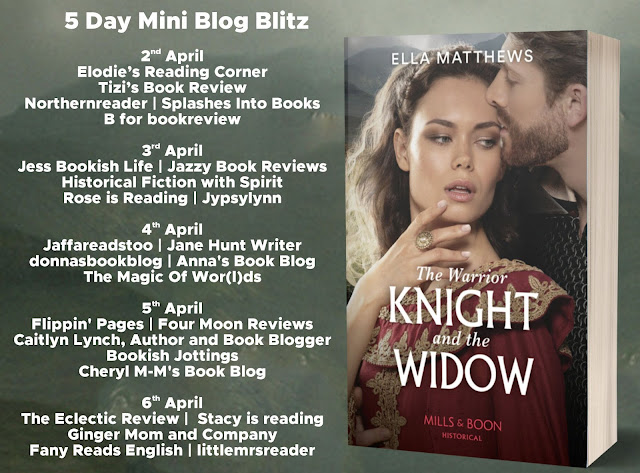