Delighted to be hosting a stop on this Blog Tour

1236. Beautiful Ailenor of Provence, cultured and intelligent, is only thirteen when she marries Henry III. Aware of the desperate importance of providing heirs to secure the throne from those who would snatch it away, she is ruthless in her dealings with Henry's barons.

As conflict escalates between them, Ailenor's shrewd and clever Savoyard uncles come to support her but her growing political power is threatened when Henry's half-siblings also arrive at court.

Henry and Ailenor become embroiled in an unpopular war to protect Gascony, last English territory on the continent, sparking conflict with warrior knight, Simon de Montfort, the King's seneschal. Ailenor, desperate to protect Gascony for her son, strives to treat with France and bring peace to Gascony.

Caught in a web of treachery and deceit, 'she-wolf' Ailenor's courage is tested to the limit. Can she find the strength to control her destiny and protect her all that she holds dear.

My knowledge of Alienor of Provence is, to say the least, sketchy and apart from knowing that she was the wife of King Henry III, and mother of King Edward I, the background to her life and times seems to have passed me by. So it has been particularly refreshing to read a novel which not only brings Alienor to life in a meaningful way, but which also highlights something of the troubled times in which she lived. Married, when very young, to Henry III, who was considerably older, was never going to be easy for Alienor, however, her determination and strength of purpose,which she displayed as a young teenager, would stand her in good stead for what would follow during in her eventful life. It's easy to see why Alienor has been branded with the infamous sobriquet of 'she-wolf' as there is no doubt that her strong and quite forceful personality, made her, at times, quite unpopular, and did much to enliven the reign of her husband.

The Silken Rose is the first in a proposed trilogy and this first novel certainly gets the series off to an excellent start. The dark and dangerous world of the thirteenth century with all of its complicated politics comes to life in an authentic and meaningful way. I especially enjoyed the intertwining of Alienor's regal lifestyle alongside that of her fictional embroiderer, Rosalind, whose background in London's merchant district adds a lovely authentic touch and brings to life a lovely character who adds something quite special to the story.

Beautifully written and intricately researched The Silken Rose gave me a much needed history lesson, particularly about Henry's constant struggle against the barons and those volatile relatives who were a constant thorn in his side. However, I think what brought the book to life were the lovely descriptions of Alienor's life and her devotion to her husband and children, her love for fashion, the arts and courtly love were such a joy to read.

Over the last few days immersing myself in The Silken Rose has been a very real escape into a very different world and I have loved every moment of this historical journey. I'm already looking forward  to reading what the author will educate and entertain us with in The Damask Rose which will feature the life and times of Alienor's daughter-in-law, Eleanor of Castile, first wife of Edward I.

The Silken Rose is published today and is available from Amazon UK and other book outlets. 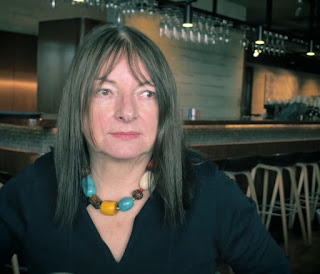 Following her first degree in English and History, Carol McGrath completed an MA in Creative Writing at The Seamus Heaney Centre, Belfast, followed by an MPhil from University of London. Her fifth historical novel, The Silken Rose, first in The Rose Trilogy, published by the Headline Group, is set during the High Middle Ages. It features Ailenor of Provence and will be published on April 2nd 2020. Carol was the co-ordinator of the Historical Novels’ Society Conference, Oxford in September 2016. 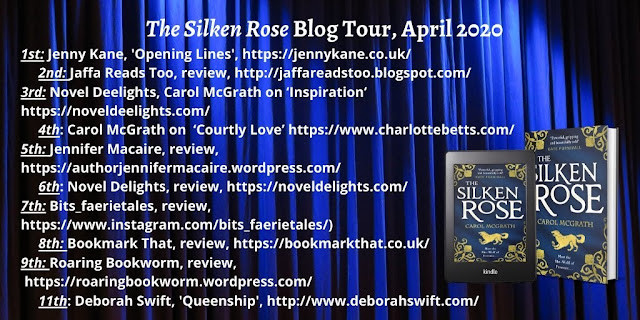