Tony, Hugh and Karen thought they’d seen the last of each other thirty years ago. Half a lifetime has passed and memories have been buried. But when they are asked to reunite - to lay ghosts to rest for the good of the future - they all have their own reasons to agree. As they take the ferry from Northern Ireland to Scotland the past is brought in to terrible focus - some things are impossible to leave behind.

In The Last Crossing memory is unreliable, truth shifts and slips and the lingering legacy of the Troubles threatens the present once again.

✯ Here's a tantalising extract from The Last Crossing ✯


Martin Kelly cried for his mother before he died.

His face was glazed with tears, his mouth a grotesque O as first he pleaded for his life and, when it became clear that they would not listen to him, called for his mother. Stripped naked, he knelt in the grave they had already dug for him. The light of the torch Tony held caught the shiny skin of the scar on his lower abdomen where he’d had his appendix out, standing out against the lividity of the bruising he carried there, his phallus shrivelled amongst the dark of his pubis, at the outer edges of the glare.

Tony had wanted to cover him up, give him his coat to offer him some dignity, but Hugh had refused. He was aware of Karen next to him, her breathing quick and shallow as she watched the black plastic bag of Martin’s clothes, which they had stripped from him, twisted in her grip.

Martin held out his bound hands in supplication, looking from one face to the next. ‘It wasn’t me,’ he said. ‘I didn’t do it.’

‘And you knew what would happen.’

It was then that Martin broke down, his body wracked with sobs that turned to retching. He vomited onto himself, half choking on it, the bile and saliva hanging in a lace from his chin to his chest. He made no effort to wipe it away.

The shot reverberated through the trees, which came instantly alive, cacophonous as a murder of crows took wing against the evening sky.

Martin twisted with the shot, his body thudding against the edge of the grave they had dug. Hugh moved across and, with his toe, pushed him down into the gaping space, before firing three more shots in quick succession, each one momentarily illuminating the still white body where it lay, the red wounds flowering as the blood unfurled with each shot.

‘Get those clothes burned,’ Hugh ordered, glancing at Karen. ‘You,’ he added, looking at Tony, ‘grab a spade and get shovelling.’

He was born in Derry, Northern Ireland in 1974. After studying English at Queen’s University, Belfast, he took up a teaching position in St Columb’s College in Derry, where he was Head of English until 2013. He currently teaches in Holy Cross College, Strabane.

Brian’s work has been nominated for, and won, many awards, including Borderlands (shortlisted for the CWA New Blood Dagger), Gallows Lane (shortlisted for both the 2009 Irish Book Awards / Ireland AM Crime Novel of the Year and Theakston’s Old Peculier Crime Novel of the Year Award 2010), and Little Girl Lost (winner of the University of Ulster’s McCrea Literary Award 2011).

In 2014, Brian won BBC NI’s Tony Doyle Award for his screenplay, Little Emperors, an award which saw him become Writer In Residence with BBC NI

Brian lives near the Irish borderlands with his wife, daughter and three sons. 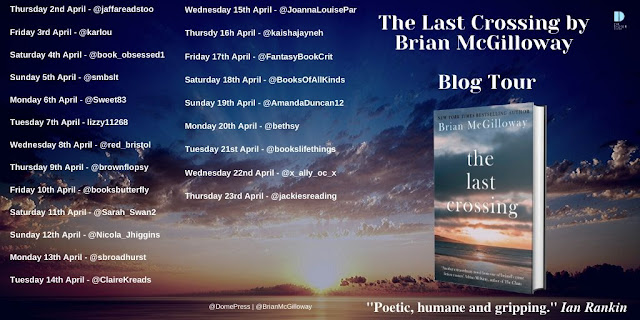