I'm thrilled to host today's stop on this Blog Tour

Jared Keaton, chef to the stars. Charming. Charismatic. Psychopath . . . He's currently serving a life sentence for the brutal murder of his daughter, Elizabeth. Her body was never found and Keaton was convicted largely on the testimony of Detective Sergeant Washington Poe.

So when a young woman staggers into a remote police station with irrefutable evidence that she is Elizabeth Keaton, Poe finds himself on the wrong end of an investigation, one that could cost him much more than his career.

Helped by the only person he trusts, the brilliant but socially awkward Tilly Bradshaw, Poe races to answer the only question that matters: how can someone be both dead and alive at the same time?

And then Elizabeth goes missing again - and all paths of investigation lead back to Poe..

I’ve just finished Black Summer and needed to spend just a little time to consider this novel to try and gather my thoughts into some semblance of order. It’s beyond hope that my review will do justice to the sheer brilliance of this second novel in the Washington Poe series and to explain the sheer complexity of this intricate plot will only give the game away and that would be an absolute disaster.

Poe is such a great character, he’s belligerent, obstructive, supremely flawed as only great fictional detectives are allowed to be, and yet, when he teams up with Tilly Bradshaw, literary magic happens, right there on the page. And then, of course there’s Tilly herself, kooky, quirky and filled with a zealous fervour to protect Poe, and let’s face, Poe definitely need protecting, usually from himself, but more often from someone who seems hellbent on bringing him down, and in Black Summer there really is someone who is determined to destroy Poe, good style!

I never thought it would be a joy to read about the most heinous of crimes, but the author makes it an absolute delight to turn the page, crossing the high Cumbrian fells with Poe, and his energetic springer spaniel, Edgar, is so realistic that you smell the turf, feel the pull of the wind and find yourself turning your battered Barbour against the slant of the rain.

Black Summer is a very, very clever crime thriller by an author who knows how to pull the reader into a complex criminal investigation. It has all the trademark twists and turns which we have come to expect with a few real surprises thrown in for good measure. I started the story on one of those dank and cold afternoons which are so typical in the north of England, where it's going dark by 2:30 pm, and didn't look up except to make restorative cups of tea until I had finished the story in one sitting.

M. W. Craven was born in Carlisle but grew up in Newcastle, running away to join the army at the tender age of sixteen. He spent the next ten years travelling the world having fun, leaving in 1995 to complete a degree in social work with specialisms in criminology and substance misuse. Thirty-one years after leaving Cumbria, he returned to take up a probation officer position in Whitehaven, eventually working his way up to chief officer grade. Sixteen years later he took the plunge, accepted redundancy and became a full-time author. He now has entirely different motivations for trying to get inside the minds of criminals . . .

M. W. Craven is married and lives in Carlisle with his wife, Joanne. When he isn’t out with his springer spaniel, or talking nonsense in the pub, he can usually be found at punk gigs and writing festivals up and down the country.. 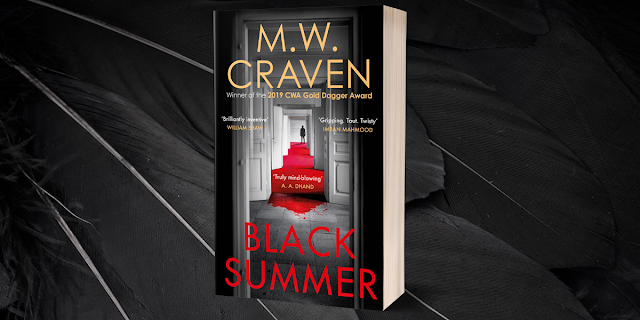