Delighted to be part of this Blog Tour

Emmeline Pankhurst stands proudly in St Peter’s Square, but she stands for so many more…

First in the Fight tells the compelling stories of the twenty women featured on the Our Emmeline statue long-list. Author Helen Antrobus brings to life the achievements of these radical Manchester women alongside beautiful illustrations by the Women in Print collective.

Be part of the legacy of the 20 Manchester women who changed the world.

The women of Greater Manchester have long stood shoulder to shoulder in the fight for equality and social change. The unveiling of the statue of Emmeline Pankhurst in St Peter’s Square, strove to represent the contributions that Manchester women had made not only to the city, but also to the rest of the world.

Sitting alongside stunning illustrations from the ‘Women in Print’ collective, First in the Fight brings to life the stories of a range of inspiring women, from suffragettes, to botanists and mathematicians. The efforts of these pioneering women have shaped the world we live in and have helped pave the way for the voices of the next generation of women to be heard.

This book stemmed from the quest to have a statue to commemorate a woman of significance to Manchester as there hadn't been a statue of a woman erected in the city since Queen Victoria in 1901.  First in the Fight looks at twenty inspirational women who have all left their mark on Manchester, some are instantly recognisable, whilst others have faded into the background, but collectively their stories must never be forgotten, and this remarkable book goes a long way in making sure that their exceptional contributions live on in public memory.


Here are the twenty women who were in the running for a statue. They are not all native to the city and not all were advocates for women’s suffrage, but individually they each left a distinct mark on their native, or adoptive, city of Manchester. I have thoroughly enjoyed reading the stories of these inspirational women.

the Emmeline Pankhurst statue was unveiled in St Peters Square in Manchester on the 14 December 2018 ...

“If we win it, this hardest fight of all fights, then, to be sure, in the future it is going to be easier for women all over the world to win their fight when their time comes.”
Emmeline Pankhurst.

This coffee table sized book is beautifully presented with glossy pages and wonderful illustrations which bring the individual stories of these amazing women to life in a very special way. However, the beauty is also in the fine attention to detail, and the enthusiasm which the authors have demonstrated in making a permanent reminder of the contribution each of these women have made to a city which is renown, the world over, for its strong and determined women. 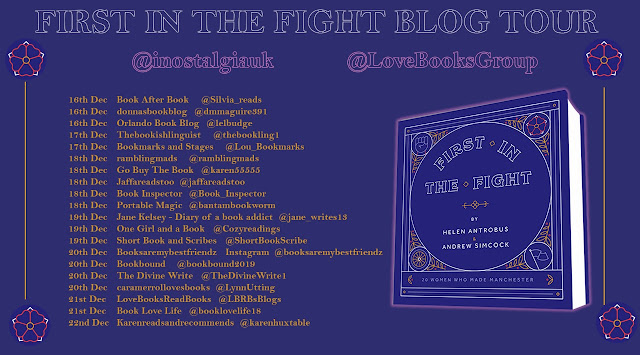