I'm delighted to host today's stop on this blog tour


Beheaded by her husband. Silenced by history. Now Anne Boleyn has a voice at last.

Anne Boleyn has been sold to us as a dark figure, a scheming seductress who bewitched Henry VIII into divorcing his queen and his church in an unprecedented display of passion. Quite the tragic love story, right? Wrong.

This electrifying expose of Anne Boleyn’s life and relationship with Henry VIII is based for the first time on the full, uncensored evidence, revealing the shocking suppression of a powerful woman in history’s true story.

In removing Anne from the line up of the ‘Six Wives Gimmick’, Hayley Nolan shuts down modern accusations of sexual blackmail at the hands of an ‘ambitious temptress,’ and instead provides proof that Anne Boleyn was a politician, activist and humanitarian working in government on schemes to relieve the poverty epidemic; campaigning for the amnesty of refugees in Europe, and fighting for the freedom of religious expression. Yet Anne’s work has repeatedly been censored and ‘male-washed’ over the years, and more so recent decades. But if ever there was a time for this sexist misinterpretation to be called out and ‘herstory’ to be heard – that time is now.

This bold new analysis is the culmination of over three years of intensive research by Britain’s exciting new historian, fusing historical evidence with a gripping psychological analysis that diagnoses Henry VIII with the mental illness of sociopathy. A prognosis that will change the way we view Henry and Anne’s ‘love story’ forever.

So, leave all notions of outdated and romanticised folklore at the door and forget what you think you know about one of the Tudors’ most notorious queens. She may have been silenced for centuries, but this urgent book ensures Anne Boleyn’s voice is being heard now. #TheTruthWillOut

So much has been written about this most enigmatic of Tudor Queens that it is quite difficult to know what is fact and what is fabrication, after all, history was written by those who had, perhaps, more to gain from her downfall, rather than her successes.

Everyone knows that Anne’s tragic life didn’t end well and her tempestuous relationship with Henry VIII has been the subject of hundreds of fictional novels and a staggering amount of non fiction books which each offer a myriad reasons as to why Anne and Henry’s relationship could have ended so tragically. In Anne Boleyn : 500 Years of Lies, the author offers an explanation  into Henry's volatile nature and the suggestion that he was a sociopath, with a borderline personality disorder, is a plausible, if, perhaps, controversial one. However, wherever his mercurial moods took him, it is always without doubt that he was a very dangerous person to be around.

The author offers a comprehensive look at Anne's life, from her early start at the court of Margaret of Austria, to her return to England in 1521, her ill fated courtship with Henry Percy and her ongoing feud with Cardinal Wolsey, and yet, the book is about so much more than Anne's romantic dalliances, it offers an insight into her moralistic views and her enthusiasm for religious reform. I have to be honest and say that I didn't really discover anything in this interpretation that I hadn't read before, but I think of you are new to Tudor history and wish to learn more about Anne Boleyn in  a book which has a distinctly modern feel in the way it is written, then this makes an interesting start.

The order of Anne's life has been expertly explored by so many eminent historians who are all keen to offer their own academic interpretation of Anne's rise to short lived glory and whether she was martyr or sinner remains to be seen, but what can be gleaned from all of these historical biographies is that the enigma of Anne Boleyn's short and tragic life remains, even after 500 years, a fascinating conundrum.

Historian and Anne Boleyn expert, Hayley Nolan is the presenter and researcher of the hit digital vlog series The History Review and its spin off iTunes podcast. A graduate of London’s prestigious Royal Court Young Writer’s Programme, Hayley further trained in screenwriting at the Royal Academy of Dramatic Art (RADA). She has worked with Historic Royal Palaces, Anne Boleyn’s childhood homes of Hever Castle and the Chateau Royal de Blois, France, as well as the National Archives of the UK government. She lives in London. 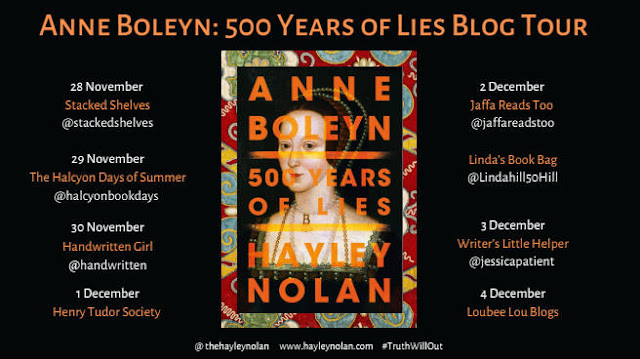