Claire lives with her family in a beautiful glass house overlooking the water. But she feels as if she’s married to a stranger – one who is leading a double life. As soon as she can get their son Joe away from him, she’s determined to leave Duncan.

But finding out the truth about Duncan’s secret life leads to consequences Claire never planned for. Now Joe is missing, and she’s struggling to piece together the events of the night that tore them all apart.

Alone in an isolated cottage, hiding from Duncan, Claire tries to unravel the lies they’ve told each other, and themselves. Something happened to her family … But can she face the truth?

Claire and her husband Duncan seem to have the perfect life but under the cracks there is much wrong with their marriage. Claire is compelled to move away from the family home in order to pick up the pieces of her life, however, this transition does not go smoothly and there are other dramatic complications, particularly surrounding Claire's son, Joe, which greatly affect how Claire reacts to some catastrophic changes.

Initially, I found the narrative to be a little bit slow and as it moves both forwards and backwards in time it becomes important to keep a firm grip on the plot just so you can keep track of where this complicated family drama is heading. Using both Claire and Duncan's individual stories in separate chapters allows their different stories to be heard, and I must admit to finding one rather more compelling than the other.

The author seems to be developing her niche in this particular genre and I enjoyed reading her debut novel, Cuckoo, earlier in the year.  Magpie is something of a slow burner in comparison but it stands on its own merits as an interesting look at the minutiae of family life. I especially enjoyed how the author interpreted some local mystical qualities, which pattern the landscape, and her imaginative description of places and situations certainly helps to create an atmospheric edginess.

Magpie is an interesting family drama which gets stronger as it goes along. I look forward to seeing what this talented writer does next. 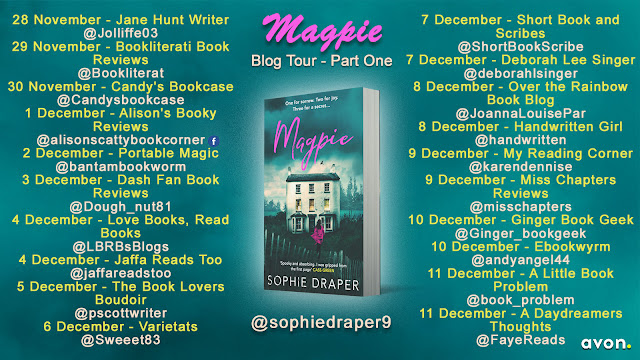