Blog Tour ~ I Dare You by Sam Carrington

Delighted to host today's stop on this Blog Tour 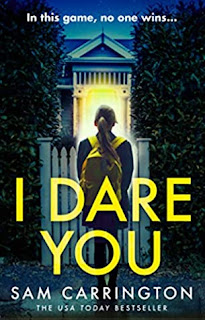 Two little girls were out playing a game of dares. Only one returned home.

The ten-year-old told police what she saw: village loner Bill ‘Creepy’ Cawley dragged her friend into his truck and disappeared.

No body was found, but her testimony sent Cawley to prison for murder. An open and shut case, the right man behind bars.

The village could sleep safe once again.

Anna thought she had left Mapledon and her nightmares behind but a distraught phone call brings her back to face her past.

Now he’s out of prison and looking for revenge. The question is, who will he start with?

I Dare You is that interesting blend of past and present and as the two time frames start to collide so long buried secrets start to be revealed. However, the journey to this final reveal is convoluted and complex and filled with lots of twists and turns. In the present we meet up with Anna and Lizzie, two young women who have more than enough going on in their private lives but when they inadvertently meet in the small village of Mapledon in rural Devon, the reasons for their return to this place of childhood memories becomes chillingly apparent as the story progresses.

The village itself is a major character in the novel, not least because all of the action takes place there but also because it shields a mystery which happened a long time ago and which continues to hold a shadow over those who call Mapledon home.

The author writes this type of psychological suspense really well and allows just enough tension to pervade without losing sight of the individual personalities of the main players. There are some fascinating characters particularly the shadowy 'Creepy Crawley' around whom the plot circles. I enjoyed watching how the story unfolded, and particularly enjoyed reading the short snappy chapters, and the way in which both past and present were clearly defined without muddling the story with unnecessary detail.

I Dare You is a clever psychological suspense story in which a definite air of creepiness pervades. It looks at the power of childhood memories and of those long buried family secrets which once exposed can never be forgotten.

Sam Carrington lives in Devon with her husband and three children. She worked for the NHS for 15 years, during which time she qualified as a nurse. Following the completion of a Psychology degree she went to work for the prison service as an Offending Behaviour Facilitator.

Her experiences within this field inspired her writing. She left the service to spend time with her family and to follow her dream of being a novelist. 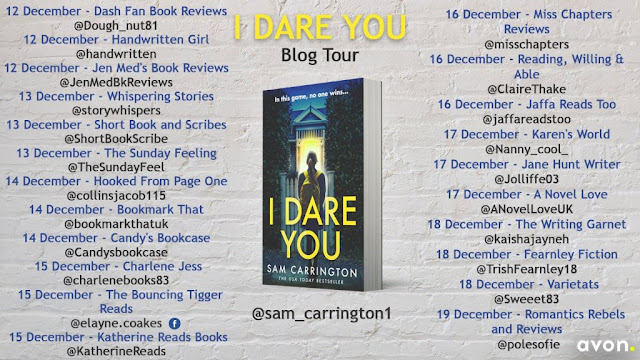