Immensely popular both during and after his lifetime, and a powerful influence on generations of writers and film-makers to this day, Edgar Allan Poe is still counted among the greatest short-story writers of all time and seen as one of the initiators of the detective, horror and science-fiction genres

This collection of twenty six tales of horror range from the macabre to the terrifying and all carry the characteristic trademark of Edgar Allan Poe doing what he does best, that is to entertain and disturb in equal measure.

It took me a little while to read this edition as the font is quite small and needs some concentration, however, what always comes across is the skillful level of writing, and whilst some of the stories didn't appeal, others most certainly did and left me with a feeling of disquiet for quite a while afterwards. Of course, the first story I turned to was that of The Black Cat, a clever little story which left me with a real feeling of unease and caused me to look at Jaffa with more than a hint of suspicion. There's also the classic short story, The Fall of the House of Usher, which was first published in 1839 and remains just as pertinent today as it did back then. The Murders in the Rue Morgue, published in 1841, is thought to be the first modern detective story. Poe's detective C. August Dupin is probably the blueprint from which other authors took their inspiration in the portrayal of what we now consider to be the classic detective.

My feeling is that this is one of those anthologies which you can easily dip into and out of at whim, and once you get used to Poe's style of writing and his way of accentuating the oddness and the morbidness of the human spirit, then the appeal of these classic horror stories is strong as ever. 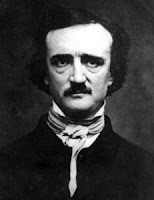 Born in Boston, Edgar Allan Poe (1809–49) was brought up by the Allan merchant family after the death of his mother and being abandoned by his father. While studying at the University of Virginia he started self-publishing volumes of poetry, and after a stint in the military began writing essays and fiction for a living. He died of unknown causes – with rabies, cholera, alcoholism and tuberculosis among the hypotheses – in Baltimore.