Blog Tour ~ The Book of Forgotten Authors by Christopher Fowler


Jaffareadstoo is delighted to be hosting today's stop on 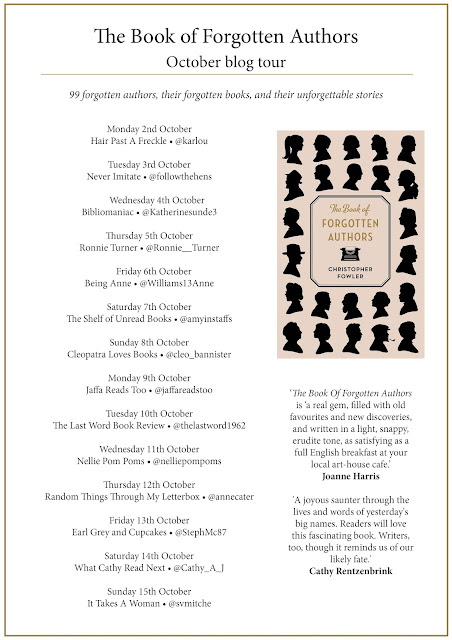 Like any bibliophile I am always thrilled to have  a book specifically about books and when offered the opportunity to take a look at The Book of Forgotten Authors, well, I couldn't resist...

Why are good authors forgotten? So heads the introduction to this look at 99 authors, their forgotten work, the possible reasons why they have fallen out of favour and the jolly good reasons why some of them should or, quite possibly, shouldn't be back in favour again.

When I was a child I used to love lucky dip packages. That growing feeling of excitement as you tear open your lucky dip bag to see what's inside and for, grown up me, dipping into and out of The Book of Forgotten Authors was rather like a lucky dip into a forgotten world of writers and their art.

I've been reading adult literature for a long time, and many of these authors I remembered reading  in my dim and distant past, so much so, that perusing the book became more like a long walk down memory lane. Some authors, may be justifiably forgotten, whilst others sparked such an air of nostalgia that, time allowing, I am sorely tempted to head back and re-read some of their work just to see if they will stand the test of time, or if they truly do deserve to languish in that dusty library of forgotten writers.

It's fascinating to see just how trends change and evolve. As a young teen, I devoured the historical fiction of Jean Plaidy and Victoria Holt, all, of course, written by the excellent author, Eleanor Hibbert, who makes an appearance in the book at number 46.  I'm not sure that these gentle stories would work for today's young readers, but for me the thrill of reading about the lives, and loves, of our Kings and Queens, gave me my first taster of historical romantic fiction. The decidedly creepy writer, Dennis Wheatley also makes an appearance at number 96. I remember, in the mid 1970s, his, rather controversial novel, To the Devil A Daughter, being passed surreptitiously around my all girls grammar school. A book which had many well thumbed pages and ear marked corners !

The Book of Forgotten Authors is set out in an easy to read way. The author writes well and captures interesting snippets of information which make the book all the more fascinating to read. I particularly enjoyed the short and concise biographies of each of the authors chosen and whilst the 99 authors are very much the author's own personal choice, I am sure there are many hundreds more forgotten authors who could quite easily have graced the pages. However, many of the forgotten resonated with me and sparked memories which I had long forgotten.

If you're a bibliophile, or have one close to you, then I am sure that they would enjoy this book of forgotten authors as much as I did. 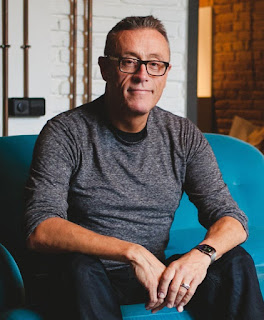 A typical example of the late 20th century midlist author, Christopher Fowler was born in the less attractive part of Greenwich in 1953, the son of a scientist and a legal secretary. He went to a London Guild school, Colfe's, where, avoiding rugby by hiding in the school library, he was able to begin plagiarising in earnest. He published his first novel, Roofworld, described as 'unclassifiable', while working as an advertising copywriter. He left to form The Creative Partnership, a company that changed the face of film marketing, and spent many years working in film, creating movie posters, tag lines, trailers and documentaries, using his friendship with Jude Law to get into nightclubs.

During this time Fowler achieved several pathetic schoolboy fantasies, releasing an appalling Christmas pop single, becoming a male model, posing as the villain in a Batman comic, creating a stage show, writing rubbish in Hollywood, running a night club, appearing in the Pan Books of Horror and standing in for James Bond.

Now the author of over forty novels and short story collections, including his award-winning memoir Paperboy and its sequel Film Freak, he writes the Bryant & May mystery novels, recording the adventures of two Golden Age detectives in modern-day London.

In 2015 he won the CWA Dagger In The Library award for his detective series, once described by his former publisher as 'unsaleable'.

Fowler is still alive and one day plans to realise his ambition to become a Forgotten Author himself.


Huge thanks to Anne Cater for her invitation to be part of this blog tour
and also to the publishers, Riverrun for my review copy of The Book of Forgotten Authors