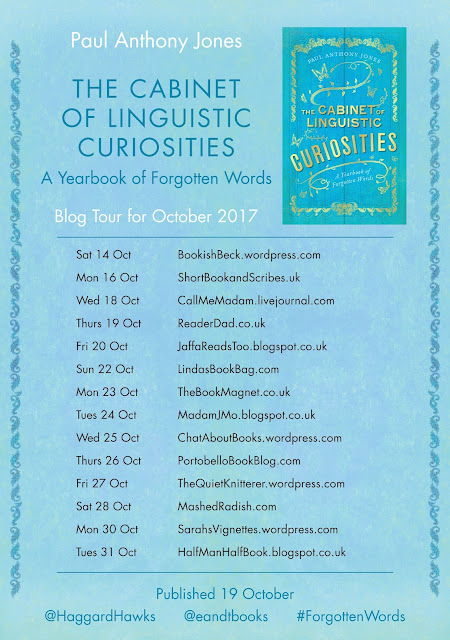 Who knows where each day will lead you?

Open The Cabinet of Linguistic Curiosities on any day of the year: you might leap back in time, learn about linguistic trivia, follow a curious thread or wonder at the web of connections brought to you by popular language blogger Paul Anthony Jones.

Within its pages you will discover a treasure trove of language, with etymological quirks and connections for every day of the year.

On 20 October 1818, Great Britain and the United States signed a treaty that established the 49th parallel – the line of latitude lying 49° north of the equator – as the permanent land border between the United States and British North America (now Canada). According to the treaty, it was agreed that the border should follow ‘a line drawn from the most north-western point of the Lake of the Woods’ in Ontario, and travel due west along the 49th parallel ‘until the said line shall intersect . . the Stony Mountains’, as the Rocky Mountains were known at the time.

As part of the deal, both countries agreed to share control of Oregon County (a disputed territory in the Pacific Northwest), with both ceding territory to the other elsewhere: the US handed the northernmost stretches of Missouri Territory, which it had claimed as part of the Louisiana Purchase, to Britain, while in return Britain ceded the southernmost stretches of one its major Canadian territories, Prince Rupert’s Land. The changes marked both countries’ last major territorial losses in North America.

A borderland, or a neighbouring country on the opposite side of a border, can be known as a limitrophe, a word first used in English in the mid sixteenth century. Although adopted from French (wherein it was once an adjective describing anywhere located on or near a boundary or frontier), limitrophe was originally a Latin word referring to a borderland region set aside for the training and support of troops. In that sense, it combines the Latin word for a boundary line, limitem, with a suffix derived from a Greek word, trophe, meaning ‘nourishment’.

PAUL ANTHONY JONES is something of a linguistic phenomenon. He runs @HaggardHawks Twitter feed, blog and YouTube channel, revealing daily word facts to 39,000 engaged followers. His books include Word Drops (2015) and The Accidental Dictionary (2016). His etymological contributions appear regularly, from the Guardian to the Telegraph, Buzzfeed to Huffington Post and BBC Radio 4.

My thoughts about the book

If you have a fascination for words, and most readers seem to like individual words almost as much as they like lists of words, then The Cabinet of Linguistic Curiosities will appeal, not only to your sense of fascination, but will also appeal to your sense of order and which ever way you choose to read the book, there will always be something which intrigues, educates and amuses.

There's something about words which soothes my soul and to have chance to take a look at words which have fallen out of common use and yet, when seen, still make the utmost sense, I am reminded of those people who have gone before and of the rich contribution they have made to our vocabulary.

Of course like any sensible person who likes books with daily musings in, I turned, at first, to those notable dates in my life and those of my family and found some hidden little gems.

Amongst the strange and forgotten words there are some real beauties to be discovered. Some made me smile, others made me nod my head in sage agreement, whilst others made me realise just how beautiful is our language.

Amongst my favourites are:

17 April : Pisgah - which is a view or glimpse of something which is unobtainable or unreachable. Rather like my dream to be a extra on the set of Outlander 😔

19 May : Spousebreach - which means adultery. I mean, could that be any more apt?

31 May : Tell-clock - something or someone who marks or tells the time; an idler. I think we have all known people like that !

And my very favourite from my grandmother's birthday , 4 December : Premonstrance : which means a portent or omen.

My feeling is, that if words float your boat as much as they float mine,  then I will premonstrate that this book will work just as well for you as it did for me.

Huge thanks to Alison at Elliot & Thompson for her kind invitation to be part of this blog tour and also for my review copy of The Cabinet of Linguistic Curiosities.