Blog Tour ~ Home is Nearby by Magdalena McGuire 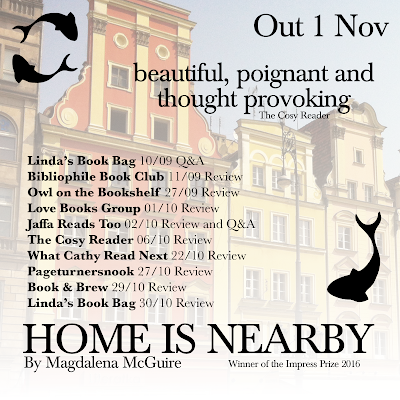 It gives me great pleasure to introduce, author, Magdalena McGuire 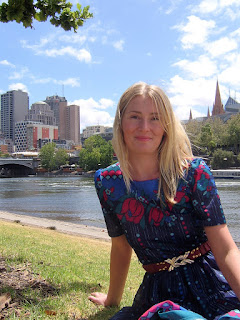 Hi Magdalena, welcome to Jaffareadstoo. Tell us a little about yourself and what got you started as an author?

I was born in Poland – or, the Polish People’s Republic, as it was known at the time. My mother is Polish and my father was Australian. They met in the university city of Wrocław, where my book is set. My mother was studying literature and my father was teaching English and learning Polish. Despite the language differences between them, it didn’t take long for them to fall in love, get married and have a baby – me!

At the time, food was scarce in the shops in Poland, and my parents believed Australia would be a better, or at least easier, place to raise a child. We moved to Australia when I was two years old. I grew up in tropical Darwin, with cyclones and palm trees and multiculturalism. So a very different place to Poland!

I’ve always wanted to be a writer, but somehow there was always a compelling reason not to write. Looking back at it, it’s clear that fear of failure was holding me back. I was paralysed by the notion that I had to write something ‘good’ instead of just writing for the pleasure of it. Finally, I broke out of this way of thinking by scribbling random thoughts in a journal as part of a regular writing practice. After that I started writing and publishing short stories. These days, writing is my absolute passion. I’m so lucky to have writing and books in my life.

Where did you get the first flash of inspiration for Home Is Nearby?

The inspiration for the novel really came from my own family heritage. Growing up, I often wondered what my life would’ve been like if we’d stayed put in Poland. What would it have been like to grow up in communist Poland, to live through the momentous decade of the 1980s when the country was on the cusp of radical change?

While the novel started out as an attempt to explore my family history, it only really came to life when I departed from that history. When I let the story unfold on its own terms. That was really exciting for me: the discovery that this story could take on a life of its own.

What can you tell us about the story without revealing too much?

Home is Nearby is about a young Polish woman, Ania, who wants to be a sculptor. She moves from her small village to the university city of Wrocław to study art. There, she befriends a group of bohemians who, despite the difficult political and economic circumstances that surround them, live life to the fullest. Everything changes when martial law is declared in Poland. When love and politics collide, Ania is forced to make a decision that will shape the rest of her life.

In researching Home Is Nearby did you discover anything unexpected?

Before I started doing the research for this book I knew next to nothing about Polish art. When I started looking into it I discovered that the art scene in 1980s Poland was rebellious and exciting and totally wild! In fact, some of the artworks were so out-there that if you transplanted them in fiction they would sound totally implausible. One that comes to mind is a performance in which an artist installed herself outside a government censorship office and solicited passers to have sex with her in public, right outside the office, in order to critique the country’s censorship policies. Apparently there were a few takers…

Whilst you are writing you must live with your characters. How did you feel about them when the book is finished? Are they who you expected them to be?

The characters in the book started out as sketches of people, but as the book progressed they became very real to me. Sometimes I’d even dream about them at night.

One of the unexpected things I learned was that you can’t force characters to inhabit either ‘minor’ or ‘major’ roles within a book. In the end, they take up the amount of space that they want to take up. Some characters who I thought were pivotal ended up not being so, whereas others really took on a life of their own.

Generally I start with a vague idea for a story and then take it from there. I don’t like to plot everything out beforehand as this feels tedious and doesn’t leave any room for the twists and turns that make writing fiction exciting. Not that there’s anything wrong with plotting! It’s just not the way I work.

What do you consider to be your strongest points as a writer?

Ooh, that’s a tough one. I’ve got a background in human rights and I like to think that I bring that to my writing. I don’t want my writing to be didactic, but I do want it to shine a light on the lives and histories of people who can be marginalised, people whose stories aren’t always told in mainstream settings.

Again, without giving too much away, what do you hope readers will take away from reading Home Is Nearby?

First of all, pleasure! I hope that Home Is Nearby is an enjoyable read and that it contains some strong images – particularly of art – that will stay in people’s minds after they’ve finished reading.

As well as that, I hope that the book gives people a different perception of Poland to the one that they might have. There are a lot of stereotypes about 1980s communist Poland and I hope that my book complicates them. I’d also love it if readers could find the parallels between Polish history and some of the political developments that are happening in our own time.

My thoughts about Home is Nearby

Poland in the 1980s saw a great deal of change, both political and social, and for those who lived during that momentous time, life was changed forever. For Ania, living in small village with her father, her hopes of becoming a sculptor are just a dream, until she gets accepted onto an art course at the University of Wroclaw. Once there, Ania comes into contact with a group of young people, and swept along in their ideology, she finds that her life takes a very different turn.

The complex and difficult political situation is brought to life in this detailed story which explores what it was like to live in the shadow of oppression. All of the characters are finely developed, but I especially liked Ania, her relationship with her father is both loving and gentle, which is in direct contrast to some of her more challenging relationships. Time and place is brought quite vividly to life, and I enjoyed travelling Ania's journey with her, learning much about the political situation in Poland, and the effect that martial law had on the people living during that time.

The impression that home is always nearby is an interesting idea and one which is particularly evident at the end of Ania’s momentous journey and I won’t spoil anything by saying too much about what happens. But I must admit to shedding a few tears at the end of the final chapter.

I think that this is a strong debut novel from a talented new author and I look forward to seeing what follows, Home is Nearby.