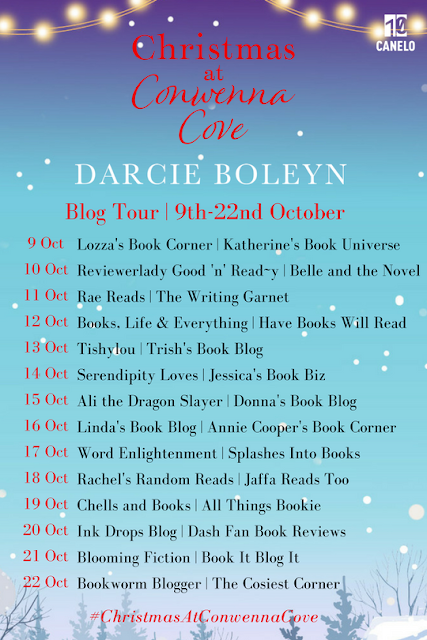 When Grace​ ​Phillips​ travels to Conwenna Cove to help her parents move there 30 years after their honeymoon in the village, she sees why they fell in love with the place. The festive decorations, carols in the air and constant supply of delicious mince pies certainly make it hard to leave. As Grace meets local vet​ ​Oli​ ​Davenport​ she initially finds him rude, but learning more about his passion for animals and how much he cares for his two kids helps Grace to see a softer side to Oli.

It’s been three years since Oli lost his wife to cancer. Though he loves eleven-year-old Amy and five-year-old Tom​ more than anything it’s hard to be mum and dad, as well as hold down a busy job. He has no interest in romance until he crosses paths with beautiful and kind-hearted Grace. The sparks fly but both Oli and Grace are holding onto fear about letting someone into their heart.

Grace loved how her parents still made time for each other, even after thirty-four years of marriage. They cooked together, exercised together and even did the crossword together. She knew that they had a special bond, and sometimes wondered whether it was so strong because of what they’d been through. Would they have stayed so close if things hadn’t happened the way they had? She just couldn’t imagine them being any other way, and the idea of one having to cope without the other was too awful to contemplate.

Conwenna Cove was a new start for them and they deserved to be happy. Her mother had always told her that life had its ups and downs, but it was important to grab happiness whenever one had the chance. Grace tried to follow that advice, although sometimes her head overruled her heart. Which was one reason why she was probably still single, having turned down a marriage proposal just last year – much to her parents’ dismay. They’d told her that they just wanted to see her happy and she’d insisted that she was; as happy as she expected to be anyway. She didn’t need a man, especially one like Marcus, to make her feel fulfilled.

She’d known Marcus since school but not had much to do with him at all, then she’d bumped into him in a café the summer before last and he’d been all over her. She’d thought it strange at the time but also been flattered by his attention, although when she thought about it now, his interest had increased when he’d stopped talking about himself and his woes for five minutes to ask what she did. When she admitted that she was a successful author, he’d wanted to know more and insisted they trade numbers. He’d taken her out about six times after that, and come to her flat for dinner and coffee, but for Grace there had been no spark. That was why, when he’d proposed, she’d been completely shocked. She’d let him down as gently as she could, but he’d been quite rude and left her reeling with a barrage of insults and a few unpleasant text messages. Then two weeks later, as she’d been queuing in Costa, he walked past with another woman, his arm wrapped possessively around her shoulders, and Grace had known that she’d had a very lucky escape.

Before Marcus, she’d had lovers: men she’d met through acquaintances and a few through dating apps, but none of the love affairs had developed into anything more serious. Grace had always found a reason not to commit, and sometimes the men had too, thereby, saving her the trouble of ending their flings.

She poured boiling water onto tea bags, then went to get the milk from the rickety old fridge that stood in the corner of the kitchen. Her parents’ own fridge was currently in the hallway, left to settle after the long journey in the removal van. As Grace bent over to open the fridge, something shot out from underneath, causing her to yelp.

‘Grace?’ Her father rushed to her side. ‘What’s wrong?’

‘Something just ran across the floor.’ She pointed in the direction of the hallway that led off the kitchen.

Simon shook his head. ‘Think we might need to consider getting a cat. What with the woods and all those fields behind, I bet there’ll be plenty more where that came from.’

‘Dad, you don’t want your house littered with dead rodents.’

‘I didn’t mean I want a cat to kill them, Grace. Just as a deterrent.’

Grace smiled. Her father had such a big heart that he wouldn’t even kill a fly, just usher it rather politely out of the house.

‘Although I have to admit that your mother and I still hope to have a dog now that she’s retired. We were just holding off until we’d moved, but I can’t see what’s stopping us now.’

‘Well, if you do get one, go to a rescue centre. There are so many dogs needing homes.’

‘I’ll just see if that mouse, or whatever it was, is lurking in the hallway.’

They both peered into the cool darkness of the hallway, but with the large boxes, the fridge and a pile of books that belonged to Grace’s parents in the way, it was highly likely that the small rodent had already found itself a new hideaway.

‘I guess we’ll have to look for it later.’ Simon shivered. ‘Hope the poor thing isn’t too scared.’

Darcie Boleyn has a huge heart and is a real softy. She never fails to cry at books and movies, whether the ending is happy or not. Darcie is in possession of an overactive imagination that often keeps her awake at night. Her childhood dream was to become a Jedi but she hasn’t yet found suitable transport to take her to a galaxy far, far away. She also has reservations about how she’d look in a gold bikini, as she rather enjoys red wine, cheese and loves anything with ginger or cherries in it – especially chocolate. Darcie fell in love in New York, got married in the snow, rescues uncoordinated greyhounds and can usually be found reading or typing away on her laptop.

My thanks to Darcie and also to Ellie at Canelo for their kind invitation to be part of this blog tour and also for the permission to share this extract from Christmas at Conwenna Cove. 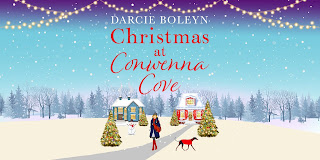