Hi Kirsty and welcome back to Jaffareadstoo.

Thank you for spending time with us today and for telling us how living in the North East influenced your first novel.

I’ve lived all my life in the north east of England, and much as I love other areas of the country, I do adore where I live and wouldn’t want to move. We are only about twenty minutes from the centre of Newcastle upon Tyne and twenty minutes in another direction gets us to Newcastle airport, or Hexham, or Durham, or Tynemouth on the coast. In fact, we were in Amsterdam once, getting rather drunk on a Wine-and-Cheese-Cruise canal boat, and we got chatting to some Americans. Even they said they were envious of where we lived. ‘Hey,’ said the guy, ‘you can really city-hop from that airport. You can even country-hop! So cool!’ We agreed, and had more wine. That was the night we ended up hitching a lift back to the hotel from a French Tour Bus as we had no idea where we were when the boat pulled up at the end of the tour. But I digress.

The north east of England is also a fascinating and very inspiring area to write about. Lots of people think it’s all flat caps and whippets (a Cockney once asked my husband if he worked in a coal mine and was genuinely surprised I had a car and a job at a University), and that it’s all like a Catherine Cookson novel up here. Well, we do have a proud heritage, but some of that, especially a little further north from us, is down to the Romans.

My first novel, The Memory of Snow, was self-published in 2012, and based on Hadrian’s Wall – more specifically, at the site of Brocolitia Roman Fort, the Mithraic Temple and Coventina’s Well. There is nothing left of the Well now except a big boggy puddle; but during the Roman times, it was a sacred well and people worshipped the goddess Coventina there - a deity very specific to that area. There was an excavation in the nineteenth century that revealed a whole load of altars and offerings in the depths of the Well, yet nobody knew why they had seemingly been dumped there. One theory was that a Christian Commander took over the fort, and the Pagan altars were destroyed. Another theory is that there was a raid on the fort, and the valuables were thrown in to be saved and collected at a later date.

Also at the site was a Shrine to the Water Nymphs, of which nothing remains – and a stream that runs down from the Well called Meggie’s Dene Burn, which allegedly swept the ashes of a seventeenth century witch down to the Tyne and out to sea.

Well – I defy anyone with an ounce of imagination to not put all that together and come up with a story; which is exactly what I did. The Memory of Snow is a timeslip, and has three timelines; one in the Roman times (which might explain what happened to Coventina’s Well), one in the seventeenth century, and one in the modern day. I wove fact and fiction together and did lots and lots of research – to the point where people have asked me how much of the story is real. All I can tell them, is that it’s based on fact, but a lot of it came from my head. Yes, for example, my witch is called Meggie; but she’s not an old hag. She’s a very beautiful young girl who just wants to heal people with her herbs. She makes one mistake, upsets the wrong people, and well – you’ll have to read the book if you want to find out more. I recently did a project with Groundworks North East at Newbrough Village, and worked with a youth group who were researching “Old Meggie” as she is known there. I was taken to what remains of the real Meggie’s house, and had a wonderful time learning all about her. The children seemed quite intrigued by the witch trials I talked about as well!

The Memory of Snow just does its own thing, to be honest. It’s a magical little book and just keeps having little resurgences. It’s also stocked in the gift shops at Vindolanda Museum and The Roman Army Museum, up on the Roman Wall and it’s lovely to know that visitors from all over the world might be buying that book and reading about such a wonderful place. The book itself is so very niche, I don’t know if it would have ever been accepted by a commercial publisher – although everyone I approached loved it and were very apologetic in their rejections! It was just too special, I think.

The actual area of Coventina’s Well is strange; but I mean strange in a good way. It’s very peaceful and very spiritual, and you can completely visualise it all as it was, if you stand next to the residual puddle for a little while. I often say that if I had a camper van I’d drive it up there and sit in it and write – maybe have a cuppa, maybe have some biscuits. But I’d certainly get some work done – I can’t think of anywhere more perfect to spark my imagination.

©All photographs by kind permission 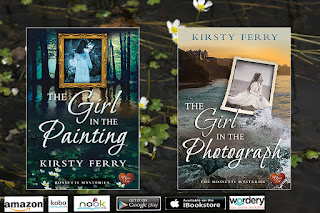