JAMES STACK: Ex-captain Special Forces, a tough, intelligent, risk taker, figured out that if you want to rob the Bank of England you don’t go through the front door guns blazing. You don’t tunnel up through the floor either. You don’t climb through windows; lower yourself on a harness; screw around with the computers; fix the security cameras or play Twister with invisible Laser beams. You don’t do any of that stuff because it won’t work. That’s why gold has never been stolen from the vaults of the Bank of England. They’ve got every angle covered....Except one.

James Stack, ex-British Forces is the brains behind the operation, he's a likeable rogue with enough intelligence to always be one step ahead of the game and who controls his merry little group of robbers with his own special brand of tough love. There's something a bit 'gung-ho' about this improbable band of bank robbers but you can't help but warm to them, even though at times you are left wondering if they are ever going to get to grips with the 'big  job' that they are planning, which is to rob the Bank of England.

It's a real boys own adventure with lots of wheeling and dealing on the side and a plot that seems too good to be true. However, with warmth and wit, the author propels the gang through a criminal minefield riddled with problems until the dramatic conclusion which is every bit as exciting as you hoped it would be.

In many ways it reminded me of a James Bond movie. There's a handsome leading man, a pretty femme fatale, hapless police detectives, glorious gangsters and excitable criminals.

Best Read With.. pizza from the box and beer straight from the bottle.. 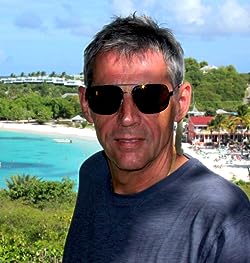 The author, Mark Wesley, has been, at various times in his career, copy writer, jingle-maker, song writer and record producer but is best known as the legendary Radio Luxembourg DJ.

My thanks to David at  Hornet Books for the opportunity to read BANGK!