Living in Lancashire I am well aware of the lure of stories which feature witchcraft. Tales steeped in legend that tell of unfortunate women accused of hexing and bewitching local communities, so that when babies died, people fell ill, crops failed or general misfortune came a-calling there was always someone to blame.

Did all women have something of the witch about them?

Widdershins takes us into the North East of the mid-seventeenth century and back to a dark, dark place where superstition and mischance are as dangerous as stumbling widdershins around a graveyard in the chill of night.

Jane Chandler has learned the use of herbs and healing from her mother, Anna, and Meg, both local wise women. These generous women taught her the old ways and the cunning ways, the traditions and teachings of country folk and how to watch for signs that creep and crumble in the dark.

John Sharpe, a product of his time and Scottish upbringing, seeks to clear the world around him of evil. Evil that he feels can be found in the shape of a woman's body, in a wife that trembles before him, in the savage fury of his fist and in his absolute belief that witches lurk in all the dark recesses of daily life.

The narrative within Widdershins is superbly controlled by a very talented writer, someone who is a definite weaver of tales, and who has brought to perfect life the inner workings of a disturbed mind. A mind which is convinced that, with God on his side, he can do no wrong. Intertwining Jane and John’s story is inspired and gives a disturbing account of how lives can be brought together and changed irrevocably by the sly capriciousness of fate.

I am intrigued by stories that coalesce, which creep ever so carefully, which cleverly intertwine lives so that truth and fiction merge and blend and become so terrifyingly convincing that it hurts to read about lives which are tumbling out of control. The last section of Widdershins strikes at the very heart of terror. Its calculated evil scared me and I wasn’t anywhere near the witch pricker as he sought to condemn the innocent to their death and send them to lie forever in an unmarked grave, unshriven and unblessed.

Based on the true events of the 1650 Newcastle Witch Trials where sixteen petrified souls were taken to a needless death, the author has brought to life a chilling story of persecution, superstitious mania and terrifying ineptitude.

I can't praise Widdershins highly enough, and for someone brought up with the stories of witchcraft, believe me, this one stands up with the best I've read.

Best read with...a sip of mead and a slice of Beltane cake , carefully avoiding the carline...

Helen Steadman lives in the foothills of the North Pennines, and she particularly enjoys researching and writing about the history of the north east of England. Following her MA in creative writing at Manchester Met, Helen is now completing a PhD in English at the University of Aberdeen.

When she’s not studying or writing, Helen critiques, edits and proofreads other writers’ work, and she is a professional member of the Society for Editors and Proofreaders.

Widdershins in advance of its publication. 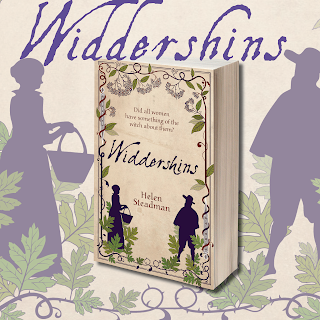