Jaffareadstoo is delighted to host today's stop on the Blog Tour

The Shadow Queen by Anne O'Brien


A tale of treachery, power-hungry families and legal subterfuges.

Woven through it is a remarkable story of a beautiful girl, desirable as a bride, growing to be a woman of foresight and power.

A story of love and loyalty and of the cost of personal ambition. The story of the woman who would ultimately wield power as the King Mother to 10 year old King Richard II.

I am delighted top be able to share this tantalising extract from The Shadow Queen...

I took a breath.

I swallowed and spoke out.

'There is an impediment to this marriage.'

How strong and clear my voice sounded as I launched the statement into the confines of the room, like a fire arrow winging its destructive path over a besieged castle wall to bury itself in a thatched roof of the stabling, with instant conflagration. A statement that would change everything. That would bring ire and retribution down on my head.

I saw Will flush to the roots of his tawny hair. Well, he could not complain. I had done what I said I would do.

'An impediment?' For the first time throughout all that discussion, my uncle Wake's regard fell fully on me, and without approbation. His voice acquired a rough edge. 'What ill-judged nonsense is this? Of course there is no impediment. Have we not studied the lines of descent of our two families with care? There is no connection between us. There is no complication of consanguinity.' He glanced across at Countess Catherine, an assured smile replacing the severe lines. 'As the Countess knows, there is no obstacle to this marriage.'

'What are you thinking, Joan? This is no time for misplaced levity.' My mother tried to sound amused, and failed.

'It is a highly desirable,' Sir Thomas continued, riding roughshod over any objections that anyone might raise. He thought that I had raised my voice because I did not like Will. Did not like him well enough to wed him. How little he knew of me, to think that I would be guided by so trivial a matter of who I liked or did not like. He did not know me at all.

Taking a cup of wine and emptying it in one gulp, my uncle was saying: 'What could be more comfortable for you than our disposition of your future.' He repeated the decisions, as if I had not heard them for myself. 'You have known each other since childhood. You will both continue to live in the royal household until you are of an age to set up your own establishment. You will receive money necessary to do so. What is there not to like? I'm sure the King will settle a castle on you for your household. There can be no impediment.'

Countess Catherine looked across at her son. 'Have you argued? Is that the problem? Arguments are soon mended.' And then regarding me as she was want to do in the past when I was an errant child who had defied her. 'I am sure that you have a kind nature, Joan. There will be no rift with my son.'

Yes, indeed, as if I were a child who affections could be commanded.

I was no child.

'No, Sir Thomas, my lady, madam my mother.' I curtsied once more. 'I like William well enough. And I think he likes me. There has been no disagreement.'

I had to do it. If I didn't, Will most assuredly would. He was already moving his feet as if finding secure ground to launch his accusation.

I spoke calmly, with faux assurance.

'I cannot marry William. I am already married. I already have a husband.'

If I had ever dreamed of making an impact on a busy room, this was it. Silence fell. The only sound the priest, who, still writing, promptly dropped his pen with a soft flutter to land on the birds and flowers that adorned the painted tiles. I watched the expressions form and change. My mother astounded, then full of recrimination. My uncle expressing disbelief, quickly subsumed into fury. Lady Elizabeth and her daughter in law both simply perplexed. The priest also full of anxious puzzlement. The servants with their silver flagons and ears pricked for any tasty morsel had been struck into immobility. And Will - William! - full of unholy joy at the debacle I had just created.

'You should know,' I added, 'that I have been married for more than six months. Since April of this year.'

'You do not know what you say.'

My mother took one long step to seize my wrist in her hand. It was not a gentle grasp.

'But I do know, madam. And I have witnesses to my marriage.'

'And who is this husband, of whom we know nothing?' My uncle Wake, his brow thunderous.

I must of course tell them.

And in that moment a species of black anger shook me. For my husband of six months had wilfully abandoned me to face this situation alone.

Anne O'Brien was born in the West Riding of Yorkshire. After gaining a BA Honours degree in history at Manchester University and a Master's in Education at Hull. she lived in the East Riding for many years where she taught history.

Leaving teaching-but not her love of history-Anne turned to writing and her passion for giving voice to the oft forgotten women of the medieval era was born. Today Anne lives in an eighteenth century cottage in Herefordshore, an area steeped in history and full of inspiration for her work.

My thanks to Bethan at edpr for the invitation to be part of this blog tour and also for the kind permission to share this extract. 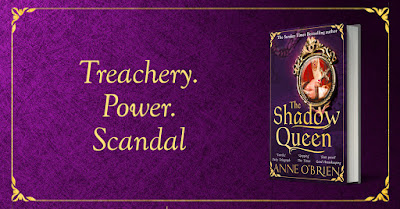