Blog Tour ~ Leopard at the Door by Jennifer McVeigh 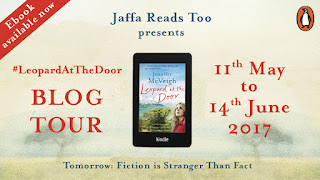 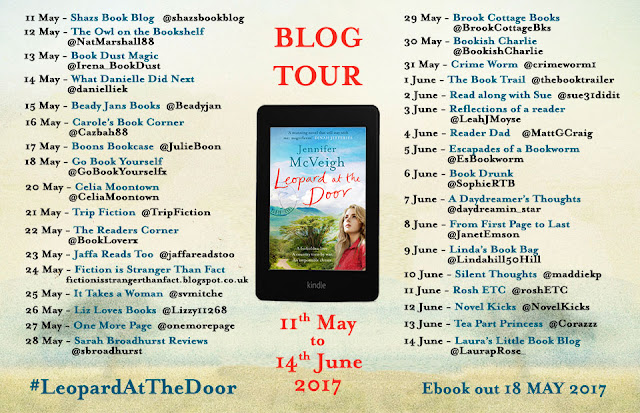 After six years exiled in England, Rachel has returned to Kenya and the farm where she spent her childhood, only to find the home she has longed for in the grip of change. Her father’s new companion—a strange, intolerant woman—has taken over the household, and the political climate in the country is growing more unsettled by the day. Looming over them all is the threat of Mau Mau—a secret society intent on uniting the Africans and overthrowing the whites.

As Rachel struggles to find her place in her home, she initiates a secret relationship, one that will demand from her an act of betrayal. Only one man knows her secret, and he has made it clear how she can buy his silence. But she knows something of her own, something she has never told anyone. And her knowledge brings her power.

When Rachel Fullsmith returns to her childhood home after an absence of six years, it brings back memories which she had thought hidden. The sights, sounds and smells of her home in Kenya are just as vivid as she remembered, and yet, all is not as it once was; now there is violence and unrest in the area and, with the introduction of a new partner in her father's life, even Rachel's childhood home appears changed and unsettled. Memories linger in the shadows and Rachel is acutely aware that finding what she thought lost perhaps means losing things forever.

This is a really powerful story about the 1950s Mau Mau uprising in Kenya, a period in history which I knew practically nothing about. So it was with interest that I started to read Leopard at the Door. With unsettling precision, the story shows just how families were ripped apart, and of how a way of life, so long in the making, was changed forever. The author writes so evocatively of the people and the places that I felt at one with the story. Africa, with all its innate splendour, comes gloriously to life, particularly in the author’s description of the stunning landscape, with its shimmering heat and vibrant colours. Rachel’s own personal story is linked irretrievably with that of her homeland. The childhood secrets she buried so deep within herself now threaten her safety and the repercussions have a devastating effect, not just on Rachel but also on those people she holds dear.

The author writes well and although the story is at times unsettling there is intensity to the narrative which I found made it all the more compelling to read. Leopard at the Door is about the fragmentation of tradition and values. It’s about the turmoil of coming-of-age in a world made angry by fear and oppression, and, for Rachel, it’s about those secrets which have been buried for far too long and which once exposed can never be hidden again.

Best Read With...Honey, from the forest, sticky and sweet.. 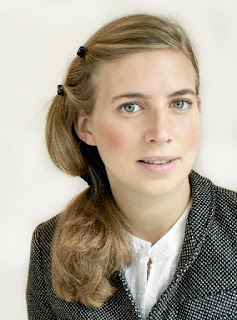 Jennifer McVeigh graduated from Oxford University in 2002. She went on to work in film, radio and publishing before giving up her day job to study for an MA in Creative Writing at Bath Spa University. She has travelled in wilderness areas of East Africa and southern Africa, driving and camping along the way. Her first novel, The Fever Tree (Penguin, 2012), was a Richard and Judy Book Club Pick and received widespread critical acclaim.

Leopard at the Door.