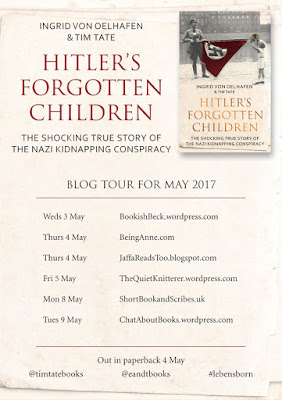 Published by Elliot & Thompson in paperback 4 May 2017

A powerful first-person account from a child of the Lebensborn: the Nazis’ programme to create an Aryan master race.

Forcibly adopted into a Nazi family as part of the Lebensborn programme, Ingrid’s heart breaking story is a quest for her own identity and an important historical document, touching on the untold stories of thousands like her.

By the 1940s, Himmler’s diabolical breeding programme had failed to provide adequate numbers of ‘racially pure and healthy’ children, so Lebensborn sought to boost the flagging German population by sinister means. Children in the occupied territories were examined and any exhibiting ‘Aryan’ qualities were taken from their parents by force to be raised by the regime.

In 1942 Erika, a baby girl from Yugoslavia, was examined by the Nazi occupiers, declared an ‘Aryan’ and removed from her mother. Her true identity erased, she became Ingrid von Oelhafen.

Later, as Ingrid began to uncover her true identity, the full scale of the Lebensborn scheme became clear – including the kidnapping of up to half a million babies like her, and the deliberate murder of children born into the programme who were deemed ‘substandard’.

I have to say that I knew nothing about the Lebensborn programme before I started to read Ingrid's fascinating and at times, difficult account of how, in 1942 aged just 9 months, she was taken from her parents in Yugoslavia and  'adopted' into the Von Oelhafen family.

When the war ends, Ingrid is three and half years old and is living with her mother, grandmother and younger brother, Dietmar in Bandekow in the Mecklenburg region of Germany. However, in the aftermath of the Second World War many German lives were fractured beyond repair, and Ingrid grew up in a state of fear and disruption. Her childhood was a lonely and frightening time and, as both of her parents had their own worries, Ingrid often faced an uncertain future. When she was eleven Ingrid discovered that she wasn't who she thought she was, and as she entered young adulthood she began a painstaking and difficult search for her true identity, which, over time, was to prove challenging and not without complications.

Reading through Ingrid's account of her life and of her search to find out more about her origins is a sobering experience and I learned much about the history of post-war Germany along with the complicated process of missing identity. The story flows well and Ingrid is a fascinating raconteur; her resolute determination to find out the truth is a credit to both her strength of purpose and utter resilience.

There is so much to share within the story which would be spoiled if I gave anything else away, so I will end with this quote from the book  which states "we are not defined by the facts of our birth but rather by the choices we make throughout life.." Ingrid is an inspirational lady and I am glad to have had the opportunity to read her story.

INGRID VON OELHAFEN is a former physical therapist living in Osnabruck, Germany. For more than 20 years she has been investigating her own extraordinary story and that of Lebensborn. She is in contact with other Lebensborn survivors and has been invited to give talks in schools about the programme and its effects on those who were part of it.

TIM TATE is a multi-award-winning documentary filmmaker and author. In 2013 he produced and directed a film about the Lebensborn programme, Channel 5’s Children of the Master Race, which is when he met Ingrid and convinced her to write this book. He is the author of twelve books, including the best-selling Slave Girl (2009)