Today, Anna is sharing her thoughts about Roger Mortimer, who is a major character in 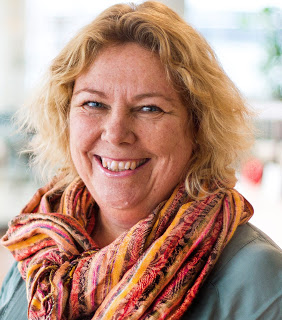 
I developed a crush on Roger Mortimer at the age of twelve. Not as bad a crush as the one I’d developed for Richard the Lionheart some years earlier, but definitely a crush along the lines of me conducting weird rituals involving walking backwards and lighting candles at midnight so as to somehow leap the huge divide of time that separated us so that I could warn him that pride is almost always followed by fall.

Obviously, Roger Mortimer didn’t need me to tell him that. He lived in a time and age where the concept of the Wheel of Life was well understood – ergo what goes up one day, comes back down the next. Except, of course, that to judge from his actions he didn’t quite believe it would apply to him. What can I say? An excessive amount of pride.

Roger Mortimer plays the central role in my series The King’s Greatest Enemy. This is not to say he’s the protagonist, I have chosen to use a fictional character as my hero as this to allow me greater freedom when retelling the events as such. My creation, Adam de Guirande, is to experience his fair share of adventures and misfortunes in the wake of Mortimer’s rise to power—and his eventual death.

Mortimer belonged to one of the more powerful baronial families in England. Loyal servants of the king, his ancestors had established themselves in the Welsh Marches, where they held substantial amounts of land. Little Roger was born the heir and it was expected that he’d grow up to diligently serve his king and thereby further the Mortimer interests.

Initially, things worked out according to plan. Roger Mortimer proved himself a capable royal servant. Problem was, he wasn’t the only loyal royal servant—and Edward II had a predilection for choosing a favourite and rewarding him with riches and powers well beyond what said individual had earned. This did not please Mortimer. In fact, all the barons except the lucky favourite were less than thrilled by their king’s favouritism. Which is why Edward II’s first favourite, Piers Gaveston, was brutally murdered by rebelling barons in 1312.

For some years, it seemed the king had learned his lesson, but while Roger Mortimer was in Ireland, there to reinstate order and bring this troublesome province firmly back under English control, a certain Hugh Despenser began climbing in Edward II’s favour. This, as per Mortimer, was not good. The Despenser and Mortimer families detested each other, and with Edward’s support Despenser began to grow too powerful, thereby threatening Mortimer’s people.

Many felt threatened by Despenser—and by the king’s willingness to ride roughshod over law and custom to give his favourite what his favourite desired. In 1321, the disgruntled barons, led by Mortimer and Thomas, Earl of Lancaster, rebelled. Initially, they reaped major success, obliging the king to exile his favourite. But Edward II was not about to take this lying down, and as this king lacked neither courage nor brains when sufficiently riled, some months later Lancaster was dead and Mortimer was rotting in the Tower, while Despenser did a happy jig with Edward.

So far, Mortimer has all the traits of a romantic and doomed hero. A man committed to his cause, a man fearlessly staring death in the face to defend what is right (or what is his). No wonder I developed such strong protective feelings for him when I first heard of him – especially considering that I was entering puberty, which in general has hormones zipping back and forth in a most disquieting way.

Fortunately for Mortimer and my young and fragile heart, he did not die in the Tower. No, in August of 1323 our hero escaped, a daring feat involving clambering up chimneys, running over roof tops and climbing walls before finally making it to the river. Once free, Mortimer made for France, determined to one day return and crush Despenser. Feelings I could totally sympathise with, even if I wondered what price Mortimer’s family would pay for his escape.

Roger Mortimer had married Joan of Geneville when they were both in their early teens. A well-matched couple, these two went on to have twelve children or so, the majority of which were locked up after Mortimer’s rebellion. His wife was treated very harshly, but I believe Joan applauded his daring escape, relieved to know he was safe in France. But in late 1325 and early 1326, rumours reached England (and I’m betting Edward and Hugh made sure they definitely reached Joan) of Roger spending his nights with Queen Isabella, Edward II’s estranged wife. Not something that would have pleased Joan, I imagine. Not something an honourable man would do—not when his wife was languishing in captivity because of him.

Seeing as I’m something of a romantic, I could forgive Mortimer for his passionate relationship with Isabella. Yes, I felt sorry for Joan, but IMO Roger and Isabella were made for each other: ambitious, intelligent, ruthless – an explosive and effective combination. Fate (and a common objective) brought them together, and what can man do against fate?

In 1326, Isabella and Mortimer returned to England at the head of an invading army. Some months later, Despenser was very dead. He’d died in the most gruesome way possible while Mortimer and Isabella sat and watched, sipping wine and feeding each other delicacies. Not something I found easy to reconcile with my youthful hero-worship of Mortimer. My hero had just acquired a major dent in his halo, and it left me squirming inside, while making up excuses along the line that Despenser had it coming, and what did I expect of a medieval grandee? 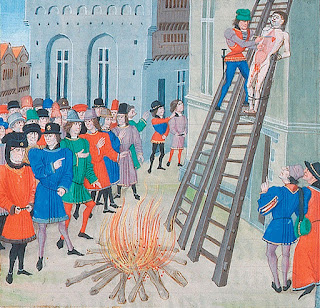 Edward II was forced to abdicate, his son was crowned in his stead, and it soon became very clear just who did the ruling: Isabella and her Roger. This did not go down well with the barons. And then, in September of 1327, came the news that Edward II was dead.
“Aha!” said the barons pointing at Mortimer, “he did it.”

I have never believed Mortimer murdered Edward II – for the simple reason that I find it inconceivable Isabella would have let him do something that heinous. I even remain unconvinced as to Edward’s death, but whatever my convictions, back then most people assumed Mortimer had rid himself of a dangerous enemy. Not exactly an act to up his reputation.

Whether or not he had royal blood on his hands, Mortimer was definitely guilty of usurpation—together with fair Isabella. He controlled the administration of the kingdom, he filled positions with men loyal to him, he called the shots. But the young king was growing up, and many a disgruntled baron was quietly whetting his sword, waiting for the opportunity to bring Mortimer down. Power, Mortimer was discovering, was easier to grab than to control, but he no longer had the option of backing down gracefully—there were too many wolves clamouring for his blood.

In March of 1330, Mortimer decided to teach all those unruly barons a not-so-subtle lesson titled “be prepared to die if you threaten me”. He did this by manipulating the Earl of Kent into treachery and once he had proof of the earl’s intentions, he had him arrested, wording things in such a way that the young king had no choice but to condemn the terrified earl to death. Seeing as Kent was Edward III’s uncle, Mortimer thereby sealed his own fate. It became apparent to Edward that either he took control soon, or there was a major risk Mortimer would never let go of his power—no matter who he might have to kill to remain on top.

Roger Mortimer in 1330 was no longer all that much of a hero. Yes, he was undoubtedly capable—he had the administration of the realm ticking along like clockwork—he was intelligent and brave. But he was also greedy and desperate to hang on to what he had, no matter the price.

For me, the later years of Mortimer’s life was like watching the pedestal beneath him crumble to pieces. Instead of a hero, here was a man, as weak and fallible as all of us are. Here was someone who’d trick a man into hanging himself by handing him the rope with which to do so, here was a man with spies everywhere. A man who was beginning to feel the ground beneath his feet becoming far too hot for comfort but who refused to budge for fear of what it would cost him.

As an adolescent, this development made me weep, ergo that desire to travel back in time and save him from it. As a novelist, I had found the perfect character: complicated and enigmatic. Which doesn’t stop me from still experiencing moments when I’d like to save him from his fate, have him ride off into a glorious sunset already in 1327 and leave the centre stage to all the squabbling factions who were more than eager to control the young king. Except, of course, that it would not have been honourable to leave the young Edward III (and his seductive and beautiful mama) so defenceless.

Ultimately, all that ambition, all that hunger for power, came to an inevitable end: in November of 1330, Roger Mortimer hanged for treason. His death was celebrated by many, but devastated quite a few, among them Adam de Guirande—and me.


Huge thanks to Anna for sharing her love of Roger Mortimer with us and for this fascinating guest post.


Under the Approaching Dark is out now Amazon UK