Today my Guest Author is ...Alison May

I am delighted to introduce Alison to the blog.....

Hi. I’m Alison and I’m a History graduate. I’m not going to lie. It’s not a qualification that’s been of huge use in my adult life. The situations in which it’s genuinely handy to be able to talk, at some length, about the relationship between the abolitionist movement and British national identity in the early 1800s, are surprisingly limited. The old joke about history graduates spending most of their working lives asking people if they want fries with that isn’t particularly accurate, but generally it’s a good route to either teaching history or doing something completely random that doesn’t relate to your university life at all.

However, you can’t let one not particularly bankable degree deter you in life, so I decided, some years later, that the best thing to do would be to go back to university. This time however, I would make a wiser choice, so I did a second degree in creative writing, because, as everyone know, that’s a skill set that you can just take to the bank. (You can’t. Well, you can but the bank people will laugh at you and tell you you’re not qualified to work there.) There are huge hangars filled with creative writing graduates all sitting in rows and old-fashioned typewriters banging out their scripts and novels which will inevitably be published making the writers rich beyond their wildest dreams. (There aren’t. Sorry creative writing students of the world. There really really aren’t.)

So there I was qualified up to the eyeballs with absolutely no marketable skills. Whatever is a girl to do? Well the first thing to do is to write a novel, which I did. And it was terrible. So I joined the RNA New Writer’s Scheme and got some feedback on the novel and rewrote the whole thing from scratch. And then I rewrote it again. And then at least once more to end up with something that didn’t entirely suck. That book became Sweet Nothing which was published by lovely Choc Lit at the end of 2013.

But the problem then is you’re expected to write another novel, and as you’ve done it once, people are way less tolerant of you writing a sucky one. And that’s where that degree in history and all those years at university finally came into their own. Not because I wrote a historical novel – I’ve talked to historical novelists and they have to do actual research; it sounds like terribly hard work. So the history element was out of the window, but the university thing was interesting. Why not set a romantic comedy in a university? I’ve been a fan of David Lodge’s university novels for a long time. The politics of academic life is fascinating, and if I was setting a novel in a university, why not a history department? And so that’s where the main character in Midsummer Dreams all work, and within that history department we meet Helen, who is a lovelorn historian and expert on the relationship between the abolitionist movement in the early 1800s, which is funny because it I’ve studied that. I always knew it would come in handy one day. 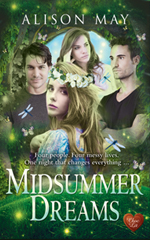 Here's the blurb for Midsummer Dreams.

Four people. Four messy lives. One night that changes everything …

Emily is obsessed with ending her father’s new relationship – but is blind to the fact that her own is far from perfect.


Dominic has spent so long making other people happy that he’s hardly noticed he’s not happy himself.
Helen has loved the same man, unrequitedly, for ten years. Now she may have to face up to the fact that he will never be hers.
Alex has always played the field. But when he finally meets a girl he wants to commit to, she is just out of his reach.
At a midsummer wedding party, the bonds that tie the four friends together begin to unravel and show them that, sometimes, the sensible choice is not always the right one.

Alison May was born and raised in North Yorkshire, but now lives in Worcester with one husband, no kids and no pets. There were goldfish once. That ended badly.
Alison has studied History and Creative Writing, and has worked as a waitress, a shop assistant, a learning adviser, an advice centre manager, and a freelance trainer, before settling on 'making up stories' as an entirely acceptable grown-up career plan.
Alison is a member of the Romantic Novelists' Association, and won the Elizabeth Goudge Trophy in 2012. She writes contemporary romantic comedies, and short stories.