The Author in my Spotlight is.... Lucienne Boyce 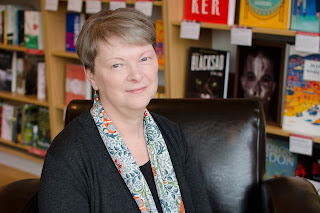 Sharing her thoughts about her latest novel

Lucienne ~ welcome back to Jaffareadstoo....

What can you tell us about Bloodie Bones that won't give too much away?

Bloodie Bones is the first in a proposed series of historical detective novels featuring Bow Street Runner and amateur pugilist Dan Foster. Although the Runners were based in Bow Street in London, they were often sent around the country to help solve cases. In Bloodie Bones Dan is sent to a village near Bath to solve the murder of a gamekeeper. The murder is connected with recent protests by the local people against the enclosure of ancient woodland, and Dan finds himself in the middle of a volatile situation as they vent their rage in vandalism, arson and riot.

When you were doing your research for the story, did you discover anything which surprised you?

I was surprised by the extent of the protests against the enclosure movement, and it was in fact these discoveries that were a major inspiration for the novel. People tend to regard the enclosure movements as part of a progressive narrative of history – as by and large “good things” that benefitted the country, for example in improved agricultural efficiency and output. But if you look more closely you’ll see that this interpretation is open to question, and it’s soon clear that the benefits, if any, were not widely shared. In fact, land enclosures often spelt disaster for rural working people, who lost their homes and their livelihoods, and were forced into the growing cities to form the cheap labour force for expanding industrialisation. I was particularly taken by the realisation of the emotional impact of land enclosures on people, which are given eloquent and heart-rending expression in John Clare’s amazing poem The Mores – a poem which underpins the novel.

Are you a plotter ...or a start writing and see where we go kind of writer?

I’m a plotter. I work out a synopsis in advance of writing, but I don’t sketch in every detail. So, for example, I’ll know Dan has to get from Place A to Place B but I haven’t decided exactly how that will happen. I’ll have a few ideas in my head and as the story develops I can gauge what works best in terms of both plot and characterisation.

Bloodie Bones is the first in a series of mystery stories featuring Dan Foster - where did the original idea for the series come from, and is Dan the person you expected him to be?

I’d been pleasantly surprised by how much I enjoyed writing the mystery elements of my first novel, To The Fair Land (also set in the eighteenth century – about the search for the anonymous author of a book about a voyage to the South Seas which involves the hero getting to the bottom of old and new crimes), and more to the point that readers were telling me they enjoyed those aspects of the story. I’ve always loved detective fiction – I’m a huge fan of Lord Peter Wimsey for example. And I have a long-standing interest in the eighteenth century, a period when I think many of the systems we live with today were established or developed – including the policing system. The Bow Street Runners were the forerunners of our CID, and even without the assistance of modern forensic processes many of their investigative methods are remarkably familiar. So it seemed natural to combine all that and come up with a Bow Street Runner as the main character.

As for Dan’s pugilism, well the eighteenth century was a violent era, blood sports were tremendously popular, and I prefer not to gloss over that. On the other hand, Dan isn’t a thug, so for him boxing is form of defence; it’s also a noble art – as indeed it was to many people of the time; and it’s something that redeemed him, a former street child, from a brutal, violent life.

Is he who I expected him to be? In many ways yes, he is, but as the series develops we’ll see him struggling with his personal issues too – his unhappy marriage, his love for his sister-in-law, his growing distaste for an oppressive legal system. Where will all that take him? I’m not absolutely sure yet!

I love everything about writing: the research, the drafting, even the editing though it can be nerve-wracking! Research involves reading so many wonderful and fascinating books, visiting locations, museums, art galleries, talking to people...Drafting is when you sit down and out of all that try to coax your imagination into creating the story: the feeling when that happens is tremendously rewarding. Editing is absorbing and if you love and care about language even the knotty points of grammar have a strange allure. Above all, there’s a real pleasure in seeing your work improve with the help of professional editors – though it is hard work and there’s often initial despondency when you realise something you thought was good actually doesn’t work all that well.

The most frustrating thing is when I feel I don’t have time to write!

I’d like them to enjoy them, of course, but also share me with me some of the things that are important to me and that the books are trying to express: the qualities of compassion, equality, care for the environment, hatred of cruelty to animals, of oppression, injustice and poverty. Dan’s own background as an abandoned child destined for a life of crime, and the cases he’s involved in, all reflect these preoccupations.

What's next for Dan?

I’m working on the second Dan Foster Mystery, in which he’s sent to work undercover on the trail of what I might anachronistically call a “cop-killer” in one of the reform societies of the 1790s. This was the London Corresponding Society, which campaigned for an end to government corruption and changes to the electoral system, including adult male suffrage. Inevitably, of course, the idea of female suffrage was still regarded as something very outlandish except by wonderful women like Mary Wollstonecraft! The government tried to stamp out these societies by arresting the leaders, clamping down on their publications, banning meetings and so on. Dan, who prefers a straightforward murder any day, is drawn into these murky dealings much against his will in a chase that will lead him from the radical clubs of London to the mutinous decks of the Royal Navy’s ships at the Nore. And meantime, relations with his wife continue to deteriorate and the novel ends with him getting quite a life-changing surprise!

My review of Bloodie Bones

Huge thanks to Lucienne for taking the time to answer our questions so thoughtfully.

Jaffa and I look forward to meeting up with Dan again, hopefully... very soon...!