The author in my spotlight is ...Rosie Thomas

Today I am delighted to welcome to the blog 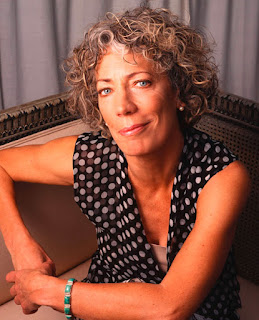 Rosie Thomas is the author of a number of celebrated novels, including the bestsellers The Kashmir Shawl, Sun at Midnight, Iris and Ruby and Constance. Once she was established as a writer and her children were grown, she discovered a love of travelling and mountaineering. She has climbed in the Alps and the Himalayas, competed in the Peking to Paris car rally, spent time on a tiny Bulgarian research station in Antarctica and travelled the Silk Road through Asia. She lives in London.

Daughter of the House is the new novel from The Sunday Times bestselling author, Rosie Thomas.

A superb slice of early twentieth century life, taking the reader from the pre-war suffragette movement, through the shell-shocked suffering of post-war Britain, through to the age of spiritualism, the roaring twenties and beyond.

Born in to a theatrical background, Nancy Wix is not a woman to be held back by family or class. At a young age she discovered clairvoyant abilities that would change her whole life – from a boating accident that leaves three strangers dead, to visions of the Great War to come, Nancy strives to change her fate. When she meets an enigmatic and handsome young man, an opportunity arises to escape the life she seems destined to lead – but can she rely on a man who leads a double life, or must she look inside herself to break free?

What inspired you to write Daughter of the House?

I loved all the characters in its predecessor, The Illusionists, and especially the old theatre of magic and illusion, the Palmyra. I wanted to revisit its hidden mirrors, secret doors and magnetic currents, so to write the story of Nancy – the daughter of the theatre – was a beguiling prospect. But I needed to give her an extra twist, to take her beyond her parents’ realm, so I made her a gifted clairvoyant. The book is really about how Nancy deals with the conflicts set up by her strange gift.

I was startled to learn just how popular Spiritualism was in the years after 1918, and how many people from all walks of life followed it. So many lives had been lost during the Great War that people needed a way of making sense of what had happened, as well as the hope of being able to make contact with the sons and husbands on the ‘other side’. There were very many charlatans and fake mediums making money and reputation from exploiting this very human need.

Yes, an implacable one. Exercise first for an hour at least. I used to run and do weights, but nowadays it tends to be brisk walking or yoga or Pilates. I wear a FitBit and if I haven’t done my steps for the day I feel bad! Next I take a bowl of cereal to my desk, read through yesterday’s pages while I’m eating it, and then get going. I keep at until I’ve written 3 pages, about 1500 words, and then I’m done for the day.

I don’t know if I’m motivated or not? I suppose after 20-odd books I must be although I tend not to think of it like that. I write because it’s what I do; because I’ve been lucky enough to make a living at it from the very beginning; because it’s closely bound up now with who I am. I mean, if that doesn’t sound too bogus…

The memory of a good story well and satisfyingly told, I hope. Also maybe an awareness of layers beneath the surface, of implications and associations not necessarily essential for plot but still available for further reflection if that’s what the reader requires.

Aha! I’ve just last week been away for a short holiday and while I was away I heard a story that made me sit up and listen very hard. Great setting, interesting period, but there’s a lot of research to be done. I’m going to take it little bit further over the summer. It may come to nothing, in which case I’ll return to the project that has been in the planning for a year or so now.

I’m too superstitious to say any more at present!

Huge thanks to Rosie for taking part in this interview and to Louise Swannell at Harper Collins for her help in arranging everything.

Daughter of the House is published
30th July 2015

My review can be found here