Animals at Weddings by Sophie King ~ Guest Post and Competition

I'm delighted to welcome Sophie King  back to the blog 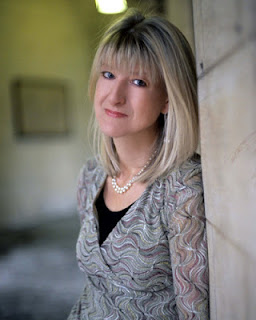 Animals at Weddings by Sophie King
He was the star of my first wedding in his grey top hat and smart whiskers. The photographer couldn’t get enough of him. “Any chance of another ear nibble?”

No. It wasn’t an over-enthusiastic groom.

He was a small little black puppy called Tramp. And I was madly in love with him. My then-husband’s secretary had given him to us as a wedding present and she’d brought him along to the wedding. How sweet was that?

Amazingly, Tramp behaved himself impeccably. Perhaps he knew he was setting a trend. Because back in those days (I was a very young bride!), it wasn’t as fashionable as it is now to have animals at a wedding.

Snakes, cats, tortoises, fish , hamsters and even a monkey ... All these are apparently “common” guests in the audience when a couple seals the knot. At least, that’s what I discovered when doing my research for my novel “The Wedding Party”.

But they can cause chaos as Tracey, a shop manager from London, found out. “My fiancé is obsessed by his pet snakes. They’re not dangerous but it took me a while to get used to them. When he said he wanted them to come to our wedding, I thought he was joking. But he wasn’t. I said I’d only allow it if they came in their travelling cage. But his brother took one out jsut after our vows, to show it to another guest. She screamed and then everyone began to scream. We had to stop the service until he took it out of the church.”

Maybe the happy couple should have got married outside like Jill and George, a farming couple from Yorkshire. They were hitched in a field, surrounded by their sheep. “We didn’t want them to miss out on our big day,” said Jill. “Mind you, it took ages to get the sheep poo off the bottom of my dress.”

In the United States (where else?) exotic animals are a must for any couple who want a wedding with a difference. One couple from Florida got married with a pair of llamas next to them as they said “I do” on the beach. And in Las Vegas, there is even a lion ranch where couples can tie the knot as close to the lions as safety permits.

Elephants are considered to bring good luck according to some cultures. Perhaps that’s why one groom arrived on top of a large Dumbo – again in Vegas.

But before you start making a list of your must-have pets, you need to think about whether it’s fair on them, say the experts. Animals aren’t like wedding guests. They can’t be expected to be quiet during a service and hang around afterwards for the photographs. They need the right conditions – including the correct temperature and food. You also need permission from the wedding venue. Remember that snake wedding I mentioned earlier? It turns out that no one had told the vicar. Snakes might be part of the Adam and Eve story but that doesn’t mean they make good wedding guests.

Maybe it’s safer to stick with a rabbit. “Our Floppy is very domesticated,” says Holly, a bride from Devon. “I carried her down the aisle instead of a bouquet. She loved it.”

Really? But how did she know?

Meanwhile, if you’re thinking of proposing and are still summing up the nerves, you could always ask your dog to do the deed for you. That’s what Martin did after living with his partner for five years. “One evening, our Labrador padded into the kitchen with a note attached to his collar,” said Sandy from London. “It read 'Will you marry me'?”

NOTE: Some of the names in this post have been changed!

Shortlisted for Love Story of the Year by the Romantic Novelists’ Association in 2010.


When Monique and Geoff decide to tie the knot they soon discover that love second time around brings special challenges. And not just for them. There are ups and downs for family, friends, the wedding planner, and even the vicar as the big day approaches.

Geoff’s ex-wife can’t accept that he has moved on. Could a chance meeting help Helen come to the right decision about her future?

Their daughter, Becky, doesn’t approve of her dad’s bride-to-be. But as she juggles motherhood and a high-powered career, will she realise it’s her own marriage that needs most attention?

Janie was sacked from her last job as a wedding planner for being so disorganised. Is she really the right choice to help the happy couple get hitched without a hitch?

Mel swapped a job in advertising for a new life as a vicar. But can she keep her faith after an accident which turns her family’s world upside down?

Family and friends learn that the course of true love never did run smooth, and there really is no such thing as a stress-free wedding. But can they each still find their own happy ever after?

To celebrate the publication of "The Wedding Party", thanks to the lovely people at gift experience company Tinggly, we have a voucher worth £80 for any one experience worldwide from their Essential Collection. The ideal present for friends or family who are about to tie the knot!

To be in with a chance, simply email your answer to the following question to sophie@greatstorieswithheart.com by midnight BST on 10th August 2015.

Question: What is the name of Geoff's daughter in "The Wedding Party" by Sophie King?

See the full range at www.tinggly.com. Voucher must be used by 25/6/2017. Entry will be chosen at random. Emails and contents will not be shared with any third party and will be deleted after the competition. Competition run by Wyndham Media Ltd. Judges decision is final.