When AA meetings make her want to drink more, alcoholic murderess Maeve sets up a group for psychopaths. Maeve has everything. A high-powered job, a beautiful home, a string of uncomplicated one-night encounters. She’s also an addict: a functioning alcoholic with a dependence on sex and an insatiable appetite for killing men.
When she can’t find a support group to share her obsession, she creates her own. And Psychopaths Anonymous is born. Friends of Maeve. Now in a serious relationship, Maeve wants to keep the group a secret. But not everyone in the group adheres to the rules, and when a reckless member raises suspicions with the police, Maeve’s drinking spirals out of control. She needs to stop killing. She needs to close the group. But Maeve can’t seem to quit the things that are bad for her, including her new man... 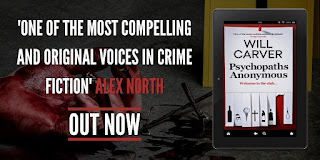 📖 My thoughts..
I don't often start my reviews with a disclaimer but reading this book can seriously affect your time as once you start reading you won't be able to stop.
Maeve is addicted to alcohol, sex and killing, usually in that order, and whilst she attends as many self-help groups as she can find, it's not as you would imagine because she needs assistance in any shape or form but that she rather enjoys seeing people at their lowest ebb and rejoices in their misery. Bored with the idea of yet another sitting around in a circle group, and whilst under the guise of needing help for her addiction Maeve selects her next victim target by carefully plotting their demise in the most heinous of ways. And then, she has the germ of an idea to form her own self help group, and et voilà, Psychopaths Anonymous, is born.
As addictive as its lead protagonist, Psychopaths Anonymous is a difficult book to appraise without giving things away which would be almighty spoilers but what I will say is that, it shouldn't be possible to 'enjoy' a story about a woman who has no moral compass, but enjoy it I did, and as much as I tried to dislike Maeve, I found that I rather admired her skill in removing those who she perceived to have done her, and others, great harm.
There is no doubt that Will Carver is a very talented writer of dark tales as this is definitely not a story for the faint hearted, so don't read if you are offended by sexual or religious references, and by a woman who kills people just because she can, however, if you are looking for something which is as highly addictive as it is highly original then Psychopaths Anonymous is worth a try.
Just to add that whilst Psychopaths Anonymous is part of a series and features some characters who appeared in Good Samaritans it is perfectly possible to read it as a standalone story. I haven't read the previous books and managed just fine although there are, I guess, some subtle references which I missed but which are there for the taking should you know what to look for...
About the Author 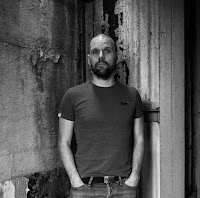 Will Carver is the international bestselling author of the January David series. He spent his early years in Germany, but returned to the UK at age eleven, when his sporting career took off. He turned down a professional rugby contract to study theatre and television at King Alfred’s, Winchester, where he set up a successful theatre company. He currently runs his own fitness and nutrition company, and lives in Reading with his two children. Will’s latest title published by Orenda Books, The Beresford was published in July. His previous title Hinton Hollow Death Trip was longlisted for the Not the Booker Prize, while Nothing Important Happened Today was long-listed for the Theakston’s Old Peculier Crime Novel of the Year. Good Samaritans was book of the year in Guardian, Telegraph and Daily Express, and hit number one on the ebook charts.
Twitter @Will_Carver #PsychopathsAnonymous #WelcomeToTheClub
@OrendaBooks
@RandomTTours 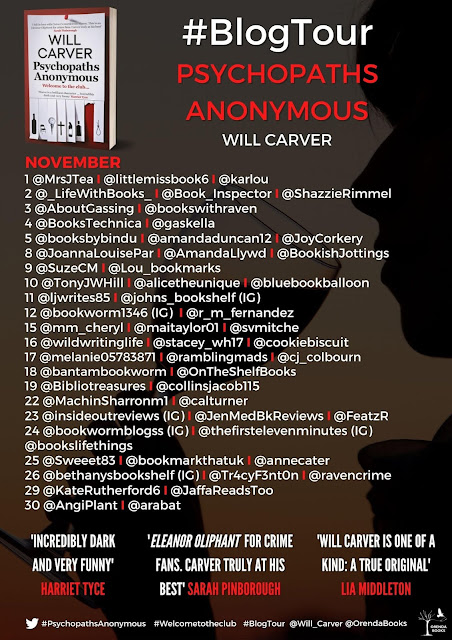