Ruby Carter works hard in her parents' bakery. Whilst life isn't easy, she's happy enough - her gentle mother protects young Ruby from her cruel father and loves her unconditionally. So, when her mother falls seriously ill, Ruby is heartbroken. Then, from her deathbed, her mother reveals that Ruby was adopted.
Stricken by grief and alone with the violent man she called her father, Ruby feels she has no choice but to flee. At just fifteen, homeless and alone she is relieved when a kindly stranger named Mrs Bamber takes pity on poor Ruby and welcomes her into her home.
But soon, Ruby learns Mrs Bamber is not as generous as she first seemed - she forces Ruby into a life of crime as a jewel thief in Birmingham's jewellery quarter. With nothing to her name and nowhere to go Ruby has no choice but to go along with it, despite the guilt and shame she feels. But Ruby is determined that she will atone for what she's done, and be reunited with her birth parents.
Ruby's only wish is to find her family.
📖 My thoughts..
Ruby Carter's young life hasn't got off to the best of starts and when her mother dies a devastating secret is revealed which spirals Ruby's life out of control. Rescued by a woman who, on the surface, seems to have a good heart, it soon becomes obvious that the enigmatic Mrs Bamber wants Ruby for something quite sinister.
What then follows is a lovely rags-to-riches story in which we see young Ruby battle against everything life threw at her and even though her good nature and enthusiasm will be tested to the absolute limit of her endurance what shines throughout is Ruby's simple wish to discover more about her origins.
Beautifully written with all the trademark characteristics which are so reminiscent of this author's popular writing we once again have a story which wrings out every last drop of emotion to leave us wanting only good things for Ruby and also for those who care for her. Bringing the dark side of Victorian Birmingham to life, from the wealthy drawing rooms of the rich, to downright creepy asylums, there is never a moment when the story doesn't draw you into Ruby's world. I especially enjoyed the references to jewellery making and wished I could have seen some of Ruby's clever designs for myself.
I've now read several of this author's heartwarming historical sagas and I think A Simple Wish is one of my favourites.
A Simple Wish is published by Zaffre, in hardback, ebook and audio and is available to buy from all good book retailers.
About the Author 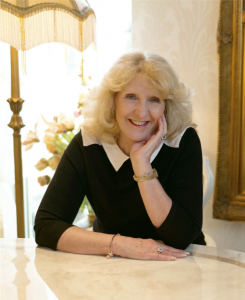 Rosie Goodwin is the million copy bestselling author of more than thirty novels. She is the first author in the world to be allowed to follow three of Catherine Cookson's trilogies with her own sequels. Having worked in the social services sector for many years, then fostered a number of children, she is now a full-time novelist. She is one of the top 50 most borrowed authors from UK libraries. Rosie lives in Nuneaton, the setting for many of her books, with her husband and their beloved dogs.
Website
Twitter @RosieGoodwin #ASimpleWish
@ZaffreBooks
To enter the special Christmas giveaway visit
The Memory Lane Book Group on 26th November on Facebook 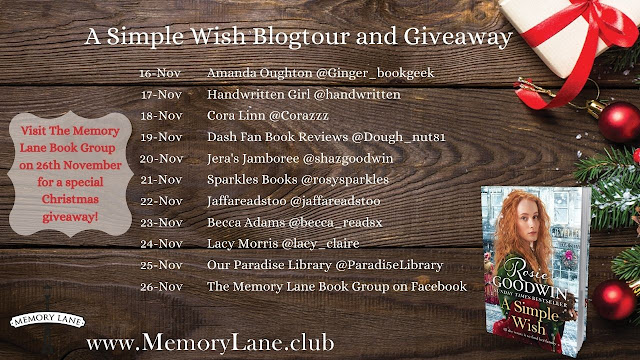