Delighted to be part of this blog tour today

It’s a world of happiness and friendship, but also violence and poverty. Now that Dolly runs the Daydream Gin Palace on Gin Barrel Lane she can finally control her own destiny, but sometimes fate still plays its hand.
Keen to expand her empire, Dolly and Jack take on a new pub, but they are in for a shock when a foul smell in one of the bedrooms turns out to come from a body hidden in the wall.
As the police hunt for their suspect, rumours abound, spread by the local urchins – happy to be used as runners for a little bit of food and a coin or two.
But rumours can be dangerous, and as one of the worst winters on record covers everything in snow, Dolly and Jack have to fight for the lives they have made for themselves, and for the urchins that they have come to think of as family. Will the arrival of a new baby on Gin Barrel Lane bring the promise of new hope, or will the long-awaited thaw uncover new secrets and new tragedies...
​
The Queen of Black Country sagas is back on Gin Barrel Lane with a rip-roaring, heart-warming, page-turning story of family, friendship and beating the odds. Perfect for fans of Val Wood and Lyn Andrews.
📖 My Thoughts..
Gin is strong commodity in the nineteenth century as it offers a fleeting escape from a rough world which is high in poverty and unemployment. Twenty-one year old, Dolly Perkins runs her very successful Gin Palace on Gin Barrel Lane in Birmingham and despite her relative youth she is well on her way to becoming a very successful business woman, so much so, she wants to increase her little empire by purchasing a struggling pub in a run down area in order to turn it into another gin palace success.
Dolly is a good employer and demands loyalty and respect from her employees and in return she makes sure they are well paid. With the help from Jack Hawkins, her newly appointed manager, Dolly sets about restoring an old pub into a new venture, the Emporium of Dreams, but in doing so she runs the wrath of the unscrupulous, Ezra Moreton, who seems to want to bring Dolly's empire tumbling down.
What follows is a well written historical saga which follows on from the first book in the series which introduced us to the characters. However, don't worry, if you haven't read the first book, as its easy to pick up the story as the author adds enough back information. There's a lovely warm hearted feel to the story and even though Dolly's path to success is far from easy, she does so with stoicism and well intentioned enthusiasm for everything she does. The history of the time sits well and the author brings to life the hardship of those who are living in hard times but amongst the sadness there is also humour and the strong ethic of working hard for want you want. Dolly is a prime example of how sheer hard work and determination can pay off in the long run.
I can easily see this lovely, warm-hearted series continuing, as there is still so much more for Dolly Perkins to achieve in future stories.
About the Author 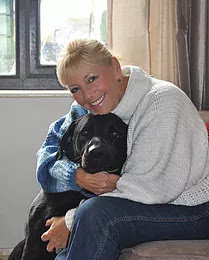 Lindsey Hutchinson is a bestselling saga author whose novels include The Workhouse Children. She was born and raised in Wednesbury, and was always destined to follow in the footsteps of her mother, the multi-million selling Meg Hutchinson. Lindsey’s first title for Boldwood was published in February 2020.
Newsletter sign up
Bookbub
Twitter @LHutchAuthor #AWinterBabyForGinBarrelLane
@BoldwoodBooks #BoldwoodBloggers
@Rararesources 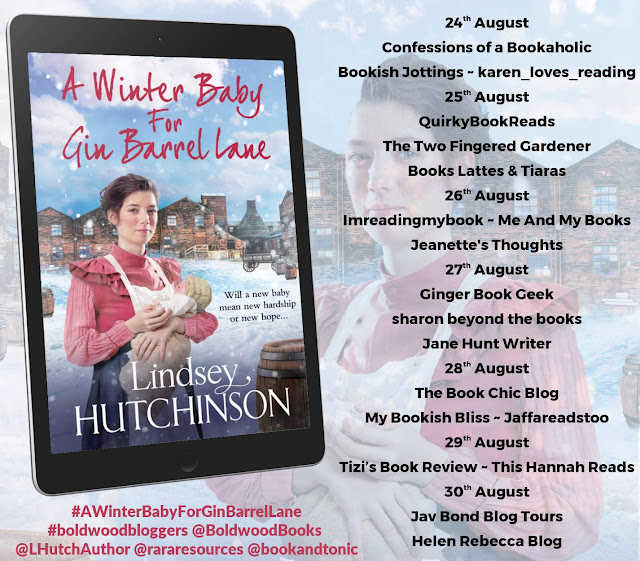