Charlotte and Sam were partners. In life, and in crime. They never stole from anyone who couldn't afford it. Wealthy clients, luxury cruise ships. It was easy money, and harmless. At least, that's what Charlotte told herself, until the world caved in on her.
But now, years after she tried to put that past life behind her, it comes rushing back when her estranged ex-husband Sam suddenly goes missing - and someone threatens to expose what they did.
Desperate to escape whoever is tormenting her, Charlotte takes a job as events planner for an engagement party onboard a super yacht in the Caribbean. For a while, her plan seems to have worked, nothing but open ocean and clear skies ahead. Until it becomes clear that she's no longer a thousand miles away from harm.
Because whoever is behind it all is onboard too. And now there's nowhere left to run.
📖 My Thoughts..
What a roller coaster of a ride this turned out to be, especially as Charlotte and Sam seem, on the surface, to be the perfect couple. Only problem is, no-one is perfect, and pretty soon we start to see cracks developing in this relationship which definitely don't bode well for their future.
The opening of the novel, with its hint of intrigue, sets the scene, especially the back story of how Charlotte met Sam, their adventurous time working on luxury cruise ships together, and their rather unusual way of making a little extra on their trips from clients who have so much wealth they don't notice when some of it goes missing. However, nothing this good lasts forever, and Charlotte has a rude awakening which threatens her life in more ways than one.
What gradually emerges is a story of lies, deceit and danger which become all the more intriguing as we discover what's happening to Charlotte in the present, more about her relationship with her now ex-husband Sam, and her need to discover some vital truths about their past life together. Keeping the intrigue alive, the story flits between the events of the past and Charlotte's present time on board a luxury yacht in the Caribbean, where it would seem that there is someone on board who knows Charlotte's secrets.
Fast moving and pacy, with more than enough twists and turns to keep you guessing this intriguing story grips from the start and doesn't let go of your imagination until the dramatic ending which is every bit as good as I wanted it to be and which had me gasping out loud.
From its colourful cover, its intriguing plot and dangerous conclusion, The Ex-Husband is the perfect summer thriller especially if you find yourself reading it on board a luxury cruiser somewhere in the Caribbean 😊
About the Author
Karen Hamilton spent her childhood in Angola, Zimbabwe, Belgium and Italy and worked as a flight attendant for many years. Karen is a recent graduate of the Faber Academy and, having now put down roots in Hampshire to raise her young family with her husband, she satisfies her wanderlust by exploring the world through her writing.
Twitter @KJHAuthor #TheExHusband
@Wildfirebks 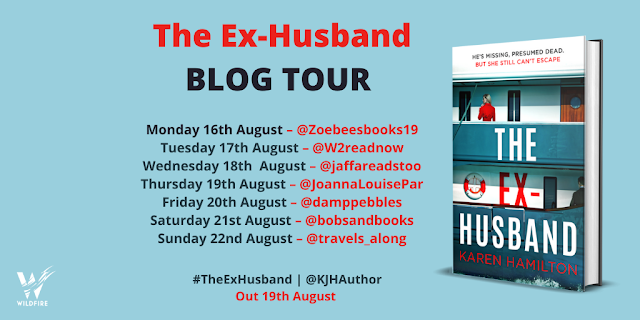