Delighted to be on this blog tour today

When three bodies are found on a wrecked ship in the Orkney Isles, forensic scientist Rhona MacLeod is brought in to investigate.
After a fierce storm hits Scotland, a mysterious cargo ship is discovered swept ashore in the Orkney Isles. Boarding the vessel uncovers three bodies, recently deceased and in violent circumstances. Forensic scientist Dr Rhona MacLeod’s study of the crime scene suggests that a sinister game was being played on board, but who were the hunters? And who the hunted?
Meanwhile in Glasgow DS Michael McNab is called to a horrific incident where a young woman has been set on fire. Or did she spark the flames herself? As evidence arises that connects the two cases, the team grow increasingly concerned that the truth of what happened on the ship and in Glasgow hints at a wider conspiracy that stretches down to London and beyond to a global stage. Orcadian Ava Clouston, renowned investigative journalist, believes so and sets out to prove it, putting herself in grave danger. When the Met Police challenge Police Scotland’s jurisdiction, it becomes obvious that there are ruthless individuals who are willing to do whatever it takes to protect government interests. Which could lead to even more deaths on Scottish soil,

📖 My thoughts..
This sixteenth book in the Rhona MacLeod series of crime novels sees forensic scientist, Rhona, and her assistant Chrissy, caught up in a very complicated investigation which begins with a distressing case involving the death of a young woman in horrific circumstances and continues with the discovery of a Russian cargo ship which has been swept ashore in the Orkney Islands during a fierce storm which battered the whole of the area. DS Michael McNab and his investigative team are caught in the middle of both of these cases and with a race against time to discover what's going on, so it would seem that these two unusual cases are linked in some macabre way.
This talented Scottish crime writer has certainly found her niche with this series and with each successive book the stories just get stronger, and more complicated. I especially enjoyed watching how this complex plot would play out amidst the world of global gaming and the sinister repercussions add a chilling edge to what is, after all, a really compelling murder mystery. This story was particularly macabre and the isolated nature of the Orkney islands only adds to the brooding atmosphere of the investigation.
The characters, as always, are a great bunch, I'm equally at home with Rhona and Chrissy, as they use their forensic skills to make sense of the senseless, enjoying their utter professionalism in the face of great challenges, but laughing out loud with them at their banter over Chrissy's breakfast goodies. DS McNab and his investigative team add the necessary police procedural to the story but the complexity of the plots are lightened with snippets about McNab's complicated police and personal life. It is this authenticity of both characterisation, and plot, where the real magic of the stories lie and which continue to make this series so popular amongst crime readers.
I can't see this wonderful Scottish crime series finishing anytime soon as I am sure there are lots of readers, like me, who finish each story with a sense of satisfaction of a case well solved and who look forward eagerly to the next adventure for Rhona MacLeod.
About the Author 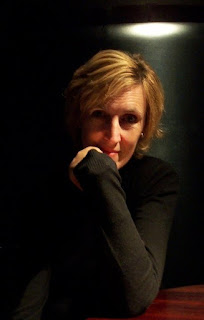 Lin Anderson is a Scottish author and screenwriter known for her bestselling crime series featuring forensic scientist Dr Rhona MacLeod. Four of her novels have been longlisted for the Scottish Crime Book of the Year, with Follow the Dead being a 2018 finalist. Her short film River Child won both a Scottish BAFTA for Best Fiction and the Celtic Film Festival’s Best Drama Award and has now been viewed more than one million times on YouTube. Lin is also the co-founder of the international crime writing festival Bloody Scotland.
Twitter @Lin_Anderson
#RhonaMacLeod #TheKillingTide
@PanMacmillan
@RandomTTours 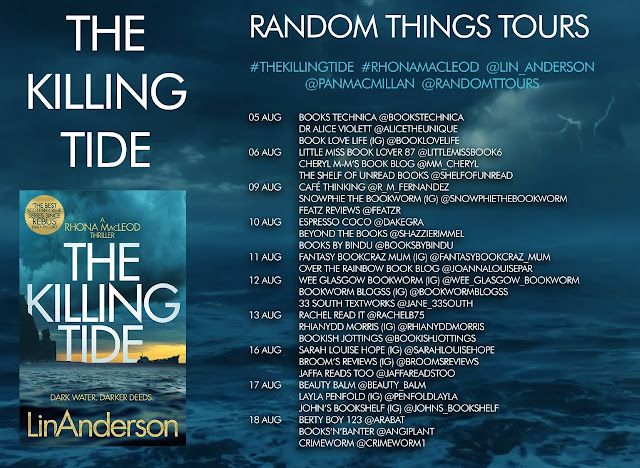