I'm delighted to be the concluding stop on this Blog Tour

IMPERIAL WAR MUSEUMS TO PUBLISH ANOTHER FORGOTTEN MASTERPIECE IN THEIR WARTIME CLASSICS SERIES Published to coincide with the 81st Anniversary of the evacuation of Dunkirk.
In May 2021, IWM will publish two more novels in their Wartime Classics Series which was launched in September 2019 to great acclaim, bringing the total number of novels in the series to ten. Each has been brought back into print to enable a new generation of readers to hear stories of those who experienced conflict first hand.
First published in 1942, Sword of Bone is a lightly fictionalised memoir based on Anthony Rhodes’ own experiences during the Second World War – firstly during the so-called ‘Phoney War’ from 1939 – 40, followed by the terror of the evacuation of Dunkirk. Shortly after war was declared, he was sent to France serving with the British Army where his days were filled with billeting, friendships and administration – the minutiae of Army life. Apart from a visit to the Maginot Line, the conflict seems a distant prospect. It is only in the Spring of 1940 that the true situation becomes clear – the Belgian, British armies and some French divisions are ‘now crowded into a small pocket in the North of France’. The men are ordered to retreat to the coast and the beaches of Dunkirk where they face a desperate and frightening wait for evacuation. The ‘miracle’ of Dunkirk was a brilliantly improvised naval operation that extracted more than 338,000 men from the Dunkirk beaches and brought them safely back to England. Some 850 vessels, including channel steamers and fishing boats, took part in this, Operation ‘Dynamo’. The final pages of the novel outline Rhodes’ experiences of the chaos of the evacuation where the scenes are depicted in vivid and terrifying detail.
IWM Senior Curator, Alan Jeffreys, has written an introduction to each book that provides context and the wider historical background. He says, ‘researching the Wartime Classics has been one of the most enjoyable projects I’ve worked on in my years at IWM. It’s been very exciting rediscovering these fantastic novels and helping to bring them to the wider readership they so deserve’.
My thoughts...
Anyone who once served with the British Army during the early years of WW2 will be familiar with the way in which the events of the 'Phoney War' in 1939 blended into what happened during the retreat of our troops, and the evacuation at Dunkirk in the spring of 1940. For those of us who weren't alive at the time, reading fictionalised accounts such as this one help to put the situation into context. The author, and narrator, Anthony Rhodes, served with the British Army, and writes with a strong sense of authenticity about what happened in the lead up to the German invasion of France in the early part of the war.
Sword of Bone, written in 1942, gives a fascinating insight into how the general housekeeping of the war was organised. The author was tasked with finding billets for soldiers, often commandeering village accommodation wherever he could, which was achieved with a stoicism and, sometimes, a sense of stalwart resignation. The French and Belgium people were remarkably accommodating and it would seem that hospitality, and friendship, were ever present.
The story moves along well, the author writes with a lightness of touch which belies the seriousness of the situation in which the British forces were placed in during the latter part of 1939. I read with interest some of the more mundane things that happened to our narrator but where the book really starts to excel is in the latter stages of the book when, between  the 27th May and 4th June, the British exodus from Dunkirk starts to occur.  Operation Dynamo, or the Miracle of Dunkirk, as it was called, saw the safe evacuation of over 338,000 Allied troops by a hastily organised fleet of over 800 vessels of all shapes and sizes. The vivid descriptions at the conclusion of the book emphasises the sheer scale of the evacuation and as the author so succinctly writes...'The noise, my dear! And the people'.
This IWM Wartime Classics series gives a fascinating insight into the Second World War, I especially enjoyed reading the introduction by Alan Jeffries, senior curator at the Imperial War Museum.
About the Author
Anthony Rhodes (1916 – 2004) served with the British Army in France during the so-called ‘Phoney War’ and was evacuated from Dunkirk in May 1940. In the latter part of the war he was sent to Canada as a camouflage officer and was invalided out of the Army in 1947 having served for 12 years. After the conflict he enjoyed a long academic and literary career and wrote on various subjects, including the 1956 Hungarian Revolution for the Daily Telegraph and well-regarded histories of the Vatican.
Sword of Bone by Anthony Rhodes is published by IWM and can be ordered here at the online IWM shop.
Twitter @I_W_M #WartimeClassics
@angelamarymor
@RandomTTours
🌠 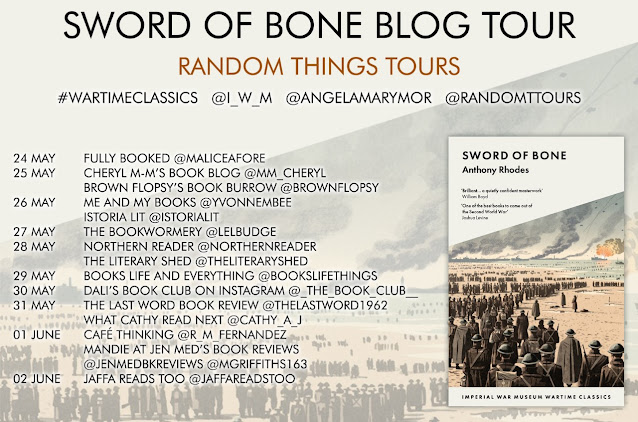