Thrilled to host today's stop on this blog tour

As young couple Nina and Conrad move into their first house together in Willow Close, they see horrified neighbours gather by a police cordon in the street – one of the residents has been attacked and brutally killed in the woods. As the police carry out interviews with each resident, it becomes clear that every neighbour has a secret to hide and some will go to extreme lengths to prevent exposure. As the image of a ‘perfect place to raise a family’ starts to tarnish, Nina and Conrad’s life plans start to unravel. They thought they had found their dream home. But have they moved into a nightmare?
📖 My thoughts..
Nina and Conrad move into what they think is their forever home on the day a body is discovered in the woods at the bottom of their garden and the other inhabitants of Willow Close are perplexed as to who, among them, could be responsible for this terrible crime. Over the course of the story we are introduced to all those fascinating characters who call Willow Close home and discover just what secrets they are all hiding. Suspects goes on to show just how little we know our neighbours and as the tangled web between them pulls ever tighter so we see the best and the worst of their very different personalities start to emerge.
There are many secrets hiding in Willow Court and the author brings everything together in a tightly woven canvas, never sensationalising the original murder, nor hampering the story with too much police procedural information but rather bringing into sharp focus all the closeness of a small neighbourhood community completely overwhelmed by what is going on in their midst, and as their personalities start crumble so a story emerges of sadness, anger and rejection.
As always the story is beautifully written by an author who knows instinctively how to give her readers everything they have come to expect, a strong storyline, fascinating characters, a plot which is filled with both humour and sadness, and a satisfactory ending, with no stone left unturned and no lingering loose ends to ponder over.
I've been reading Lesley Pearse novels for well over twenty years and she never fails to disappoint, Suspects is up there with my favourites.
SUSPECTS by Lesley Pearse is published 24th June 2021, published by Michael Joseph price £20.00 in hardback.
About the Author
Lesley Pearse was told as a child that she had too much imagination for her own good. She left home at 15 and headed to London where she worked her way through many jobs – from corsetry sales, to musician’s muse, to nanny; from gift shop owner to dressmaker – finally finding her true vocation when she became a published author age 49. The 1970s were a pivotal decade in Lesley’s life. She lived in London with her second husband John, a musician managed by Don Arden. A talented trumpeter, John had played with Dusty Springfield, Lulu and David Bowie, and the start of the decade saw the birth of their beloved daughter, Lucy and a record deal for John with his band, Sansom. The future looked bright but then the house they lived in was sold – ironically to become a homeless shelter – and the family found themselves homeless. John lost his record deal and his mental health began to suffer. Their luck seemed to change when they found a small general store in Borough Green, Kent with a cheap lease that Lesley, ever resourceful, transformed into a gift shop but on the night before opening, the snow came and no one visited the shop. Times were desperate and John became increasingly unwell, until Lesley had no choice but to have him sectioned. They eventually parted and Lesley found herself alone with Lucy. It was while hitchhiking to a job interview that she was to meet her third husband, Nigel, and find the love and security that would enable her to start writing. Lesley is now a global bestselling author, with over 10 million copies of her books sold worldwide. A natural storyteller, Lesley has lived an eventful life but is also inspired by others’ stories of courage and adversity, often giving voice to women lost in history and people damaged by their childhood experiences. She is passionate about her research and her stories have taken her far and wide: from Alaska to the Crimea. Lesley now lives in Torquay in Devon where she loves to spend time with her grandchildren.
Twitter @LeselyPearse #Suspects
@MichaelJBooks
@ed_pr 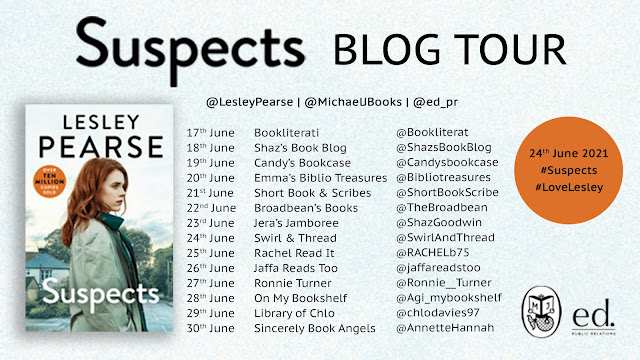