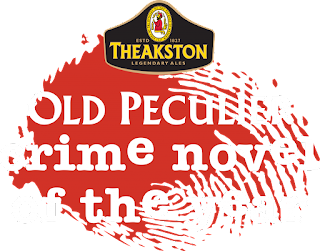 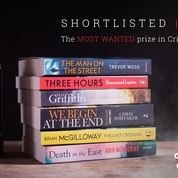 The Lantern Men by Elly Griffiths (Quercus, Quercus Fiction)
Three Hours by Rosamund Lupton (Penguin Random House UK, Viking)
The Last Crossing by Brian McGilloway (Little, Brown Book Group, Constable)
Death in the East by Abir Mukherjee (VINTAGE, Harvill Secker)
We Begin At The End by Chris Whitaker (Bonnier Books UK, Zaffre)
The Man on the Street by Trevor Wood (Quercus, Quercus Fiction)
The public are now invited to vote for the winner via www.harrogatetheakstoncrimeaward.com and the winner will be announced on the opening night of Theakston Old Peculier Crime Writing Festival, Thursday 22 July, and will receive £3,000, and a handmade, engraved beer barrel provided by Theakston Old Peculier.
Theakston Old Peculier Crime Novel of the Year 2021

Everything has changed for Dr Ruth Galloway. She has a new job, home and partner, and is no longer North Norfolk police's resident forensic archaeologist. That is, until convicted murderer Ivor March offers to make DCI Nelson a deal. Nelson was always sure that March killed more women than he was charged with. Now March confirms this, and offers to show Nelson where the other bodies are buried - but only if Ruth will do the digging. Curious, but wary, Ruth agrees. March tells Ruth that he killed four more women and that their bodies are buried near a village bordering the fens, said to be haunted by the Lantern Men, mysterious figures holding lights that lure travellers to their deaths. Is Ivor March himself a lantern man, luring Ruth back to Norfolk? What is his plan, and why is she so crucial to it? And are the killings really over? 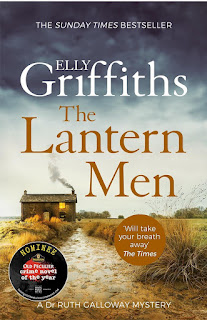 Elly Griffiths was born in London. She worked in publishing before becoming a full-time writer. Her bestselling series of Dr Ruth Galloway novels, featuring a forensic archaeologist, are set in Norfolk. The series has won the CWA Dagger in the Library, and has been shortlisted four times for the Theakston Old Peculier Crime Novel of the Year. Her Brighton-based mystery series is set in the 1950s and 1960s. Elly has also written two mysteries featuring Detective Harbinder Kaur, The Stranger Diaries, which was a Richard & Judy bestseller and won America's most coveted accolade for crime fiction, the Edgar Award, and The Postscript Murders. Elly lives near Brighton with her husband, an archaeologist, and their cat, Gus.
Three Hours by Rosamund Lupton (Penguin Random House UK, Viking)
In rural Somerset in the middle of a blizzard, the unthinkable happens: a school is under siege. Children and teachers barricade themselves into classrooms, the library, the theatre. The headmaster lies wounded in the library, unable to help his trapped students and staff. Outside, a police psychiatrist must identify the gunmen, while parents gather desperate for news. In three intense hours, all must find the courage to stand up to evil and save the people they love. 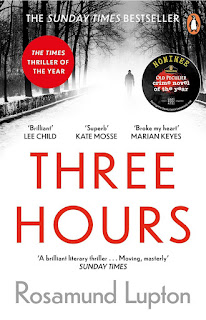 Rosamund Lupton is the author of Sister, a BBC Radio 4 "Book at Bedtime", a Sunday Times and New York Times bestseller, winner of the Strand Magazine critics award and the Richard and Judy Bookclub Readers' Choice Award. Her next two books Afterwards and The Quality of Silence (also a Richard and Judy pick) were Sunday Times bestsellers. Her books have been published in over thirty languages.
The Last Crossing by Brian McGilloway (Little, Brown Book Group, Constable)
Tony, Hugh and Karen thought they'd seen the last of each other thirty years ago. Half a lifetime has passed and memories have been buried. But when they are asked to reunite - to lay ghosts to rest for the good of the future - they all have their own reasons to agree. As they take the ferry from Northern Ireland to Scotland the past is brought into terrible focus - some things are impossible to leave behind. In The Last Crossing memory is unreliable, truth shifts and slips and the lingering legacy of the Troubles threatens the present once again. 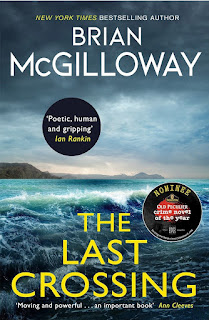 Brian McGilloway is the author of eleven crime novels including the Ben Devlin mysteries and the Lucy Black series, the first of which, Little Girl Lost, became a New York Times and UK No.1 bestseller. In addition to being shortlisted for a CWA Dagger and the Theakston Old Peculier Crime Novel of the Year, he is a past recipient of the Ulster University McCrea Literary Award and won the BBC Tony Doyle Award for his screenplay, Little Emperors. He currently teaches in Strabane, where he lives with his wife and four children.
Death in the East by Abir Mukherjee (VINTAGE, Harvill Secker)
Calcutta police detective Captain Sam Wyndham and his quick-witted Indian Sergeant, Surrender-not Banerjee, are back for another rip-roaring adventure set in 1920s India. 1905, London. When Bessie Drummond, an old flame of Sam Wyndham's, is attacked in the street, he is determined to get to the bottom of it. But the next day, Bessie is found dead in her room and Wyndham soon finds himself caught up in her murder investigation. The case will cost the young constable more than he ever imagined. 1922, India. Leaving Calcutta, Wyndham heads for the hills of Assam, ready to put his opium addiction behind him. But when he arrives, he sees a ghost from his life in London - a man thought to be long dead, a man Wyndham hoped he would never see again. Wyndham knows he must call his friend and colleague Sergeant Banerjee for help. He is certain that this figure from can only be after one thing: revenge... 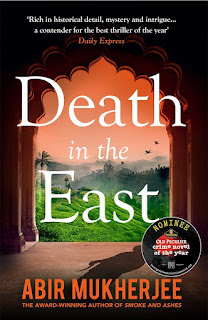 Abir Mukherjee is the bestselling author of the award-winning Wyndham & Banerjee series of crime novels set in Raj-era India. He has won the CWA Historical Dagger and the Wilbur Smith Award for Adventure Writing, and has been shortlisted for the CWA Gold Dagger, and HWA Gold Crown. His novels, A Rising Man and Smoke and Ashes were both selected as Waterstones Thriller of the Month. Smoke and Ashes was also chosen as one of The Times' Best Crime and Thrillers since 1945. Abir grew up in Scotland and now lives in Surrey with his wife and two sons.
We Begin At The End by Chris Whitaker (Bonnier Books UK. Zaffre)
Thirty years ago, a teenage Vincent King became a killer. Now he's been released from prison and is back in his hometown of Cape Haven, California, where not everyone is pleased to see him. Like Star Radley, his ex-girlfriend and sister of the girl he killed. Duchess Radley, Star's thirteen-year-old daughter, is part-carer, part-protector to her younger brother, Robin - and to her deeply troubled mother. But in trying to protect Star, Duchess inadvertently sets off a chain of events that will have tragic consequences not only for her family, but for the whole town. 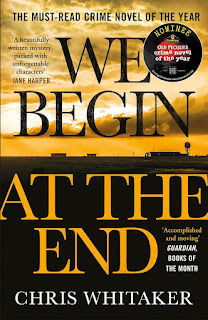 Chris Whitaker is the award-winning author of Tall Oaks and All The Wicked Girls. Both books were published to widespread critical acclaim, with Tall Oaks going on to win the CWA John Creasey New Blood Dagger Award. We Begin At The End has been optioned for film and is currently in development. It was an instant New York Times bestseller. Chris lives in Hertfordshire with his family.
The Man on the Street by Trevor Wood (Quercus, Quercus Fiction)
It started with a splash. Jimmy, a homeless veteran grappling with PTSD, did his best to pretend he hadn't heard it - the sound of something heavy falling into the Tyne at the height of an argument between two men on the riverbank. Not his fight. Then he sees the headline: GIRL IN MISSING DAD PLEA. The girl, Carrie, reminds him of someone he lost, and this makes his mind up: it's time to stop hiding from his past. But telling Carrie, what he heard - or thought he heard - turns out to be just the beginning of the story. The police don't believe him, but Carrie is adamant that something awful has happened to her dad and Jimmy agrees to help her, putting himself at risk from enemies old and new. But Jimmy has one big advantage: when you've got nothing, you've got nothing to lose. 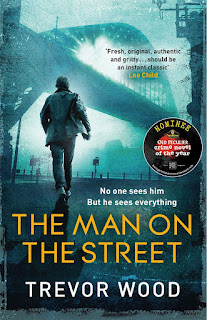 Trevor Wood has lived in Newcastle for twenty-five years and considers himself an adopted Geordie. He's a successful playwright who has also worked as a journalist and spin-doctor for the City Council. Prior to that he served in the Royal Navy for sixteen years. Trevor holds an MA in Creative Writing (Crime Fiction) from UEA. The Man on the Street, his first novel, was published to widespread critical acclaim and won the 2020 CWA New Blood Dagger. One Way Street is his second novel.
About Theakston Old Peculier Crime Novel of the Year
Launched in 2005, the Theakston Old Peculier Crime Novel of the Year Award is the most prestigious crime novel prize in the country and is a much-coveted accolade recognising the very best crime writing of the year.
Previous winners include Mark Billingham, Val McDermid, Belinda Bauer, Denise Mina, Lee Child, Clare Mackintosh and last year’s champion Adrian McKinty, who was awarded the trophy for his smash hit The Chain.
The 2021 award is run by Harrogate International Festivals in partnership with T&R Theakston Ltd, WHSmith and the Express. It is open to full length crime novels published in paperback from 1 May 2020 to 30 April 2021 by UK and Irish authors.
The longlist of 18 titles is selected by an academy of crime writing authors, agents, editors, reviewers, members of the Theakston Old Peculier Crime Writing Festival Programming Committee, and representatives from T&R Theakston Ltd, the Express, and WHSmith. The shortlist and winner are selected the academy, alongside a public vote, with the winner receiving £3,000, and a handmade, engraved beer barrel provided by Theakston Old Peculier.
The award forms part of the Theakston Old Peculier Crime Writing Festival, staged by Harrogate International Festivals in the Old Swan Hotel, Harrogate, and is traditionally awarded on the opening evening of the festival.
Find out more links
Website: www.harrogateinternationalfestivals.com
Facebook: @HarrogateInternationalFestivals
Twitter: @HarrogateFest #TheakstonAward
Instagram: @harrogatefestivals 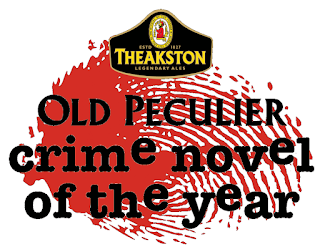