📖 Blog tour ~ The Wife Who Got A Life by Tracy Bloom

📖 Excited to host today's stop on this blog tour 📖

THE WIFE WHO GOT A LIFE perfectly captures the joyous chaos of family life and is the story of Cathy Collins, who’s come up with a list to help her nail the business of getting older.
After initially feeling annoyed by her sister’s gift of a ‘Motivational Journal’, she develops a list of monthly goals she believes will set her up for tackling the coming of middle age.
JANUARY - Write the list!
FEBRUARY - Ditch Periods
MARCH - Ditch Cooking
APRIL- Get a Life Outside the Family, preferably with ‘Young’ People
MAY - Secure My Son’s Future – i.e. Put a Rocket Up His Arse
JUNE - Teach My Daughter How to Not Get Screwed Over by Relationships
JULY - Reduce My Carbohydrate Footprint
AUGUST - Agree Who Will Clean Mum and Dad’s Toilet
SEPTEMBER - Make the Necessary Announcements about the Menopause
OCTOBER - Have the Really, Really Important Chat with My Husband
NOVEMBER - Fall in Love Again
DECEMBER- Dance with Hugh Jackman
But Cathy isn’t the only one in her family with a midlife bombshell to drop and when her husband throws his grenade into the mix, bossing the list doesn’t look quite so easy… and as everyone knows, a year can seem like a VERY long time...
📖 My Thoughts..
Anyone who has ever started a new year with a list of motivational goals to achieve will have huge sympathy for Cathy Collins who seems to be at a bit of an emotional crossroads in her life. She has two teenage children who seem hellbent on being as awkward as possible, and Cathy's lacklustre husband, Mike, is determined to 'find himself' by contemplating a dramatic career change. Add all these ingredients into the mix and what pops out is a fun and, at times, quite poignant look at the minutiae of family life.
The story takes us through each month of the year as Cathy sets off on her own set of personal motivational challenges, and as everything is told from her particularly zany perspective, there's never a dull moment. Cathy is a breath of fresh air, she is filled with angst one minute, particularly about growing older, she's forty-eight, and is then gloriously funny as she attempts to make sense of her, somewhat, complicated life as a wife, mother, daughter and sister.
The author writes with warmth and wit about Cathy and her family, who, it must be said, are not always a very likeable bunch, and there were definitely times when I wanted to give them all a bit of a talking too, especially the teenagers who could have been a bit more helpful towards their mother. I did feel quite sorry for Mike, Cathy's husband who seemed to be floundering around on the edge of family life, but overall, I enjoyed watching how the year unfolded for all of the Collins family.
The Wife Who Got A Life makes you smile but it also alludes to some quite serious family issues which although presented in a light hearted manner are no less pertinent. It's a nice, easy read, perfect for a relaxing afternoon spent reading in the garden.
About the Author 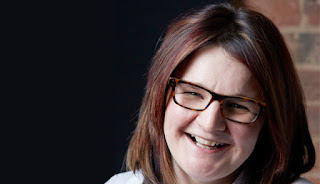 Tracy started writing when her cruel, heartless husband ripped her away from her dream job shopping for rollercoasters for the UK's leading theme parks, to live in America with a brand-new baby and no mates. In a cunning plan to avoid domestic duties and people who didn't understand her Derbyshire accent, she wrote her romantic comedy, NO ONE EVER HAS SEX ON A TUESDAY, which has sold three quarters of a million copies to date.
Twitter @TracyBBloom #TheWifeWhoGotALife
@fictionpubteam @HarperFiction
@RandomTTours 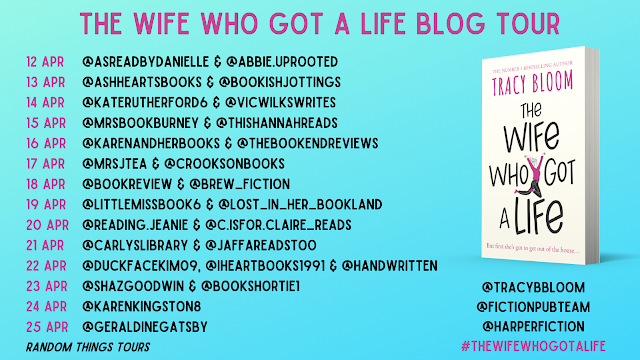