A Book of Secrets tells the story of a West African girl hunting for her lost brother through an Elizabethan underworld of spies, plots and secret Catholic printing presses.
Susan Charlewood is taken from Ghana (then known as Guinea) as a baby. Brought to England, she grows up as maidservant in a wealthy Catholic household. Living under a Protestant Queen in late 16th Century England, the family risk imprisonment or death unless they keep their faith hidden. When her mistress dies Susan is married off to a London printer who is deeply involved in the Catholic resistance. She finds herself embroiled in political and religious intrigue, all while trying to find her lost brother and discover the truth about her origins. The book explores the perils of voicing dissent in a state that demands outward conformity, at a time when England is taking its first steps into the long shadow of transatlantic slavery and old certainties about the shape of the universe itself are crumbling.
A Book of Secrets gives a striking new perspective on the era and lets one of the thousands of lost Elizabethan voices, speak out loud.
📖 My Thoughts...
In 1580 Susan Charlewood left her home in the Sussex countryside, where she had been a maid and companion to the daughter of Sir Thomas Framfield, to make a Catholic marriage with, John Charlewood, a man she had little knowledge of, but who promised her a decent life. However, this was not the first significant change in Susan’s life as she had arrived in England in 1562 as a babe in her mother’s arms, forcibly taken by Portuguese slavers from her home in Guinea, West Africa, and taken to this cold English place where both her birth name and cultural history were taken from her.
Intricately written, and well researched, A Book of Secrets is an interesting look at what it was like to be different in Elizabethan England when political turmoil was rife and religious persecution against Catholics was a significant threat. There’s a definite air of menace which runs throughout the story and which highlights just how dangerous a time it was to have strong beliefs which put you at the mercy of unscrupulous men. Susan and John Charlewood carried their own hidden secrets but as their troubled stories emerge so the cracks both in their relationship and individual lives brings them to the attention of the Queen’s intelligencers. To be  different, and a Catholic, in Elizabethan England was to walk along a dangerous path, especially if, like John and Susan Charlewood, you owned a printing press, had strong views and weren't afraid to get involved in religious politics.
A Book of Secrets has a strong historical authenticity which makes time and places scarily realistic. However, make no mistake this is definitely Susan's story and as we sympathise with her emotional struggles, desperately yearning, as she does, to find details of her proud West African heritage, so we also come to hope that her complicated story would finally reach the resolution she deserved.
About the Author 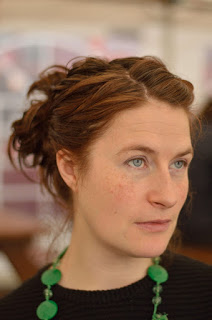 Kate Morrison is a British debut novelist. She studied English Literature at New Hall College, Cambridge and worked as a journalist and a press officer. Morrison was mentored by Ros Barber, the award-winning author of The Marlowe Papers and Devotion. She was a visiting scholar with the Book, Text, and Place 1500-1700 Research Centre at Bath Spa University. Kate Morrison currently lives in West Sussex with her family.
Twitter@KateCMorrison #ABookOfSecrets
@JacarandaBooks
@RandomTTours 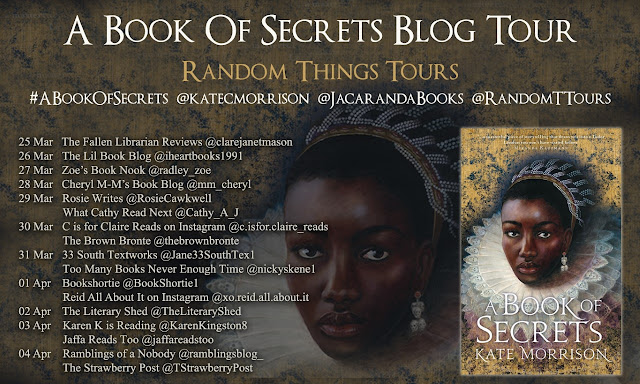