📖 Blog Tour ~ The Railway Girls in Love by Maisie Thomas

📖 Thrilled to be part of this Blog Tour 📖

Love is in the air, and together the railway girls can overcome even the hardest of times.
Mabel has finally put the past behind her, and her relationship with the dashing Harry is stronger than ever. That is, until an old flame shows up, leaving Mabel questioning her future.
Meanwhile Joan has made amends with Bob - if only she could do the same with Gran. And there's still that family mystery she wants answer to, isn't there?
As a mother and grandmother, Dot Green has always put her family first. Her job as a parcels porter has brought new purpose to her life, so is it finally time to start following her heart . . .
Life as a railway girl is busy but as war rages on and air raids disrupt daily life, the women realise they need each other more than ever, especially when there might be wedding bells on the horizon.
📖 My thoughts...
This is the third book in The Railway Girls series of historical novels and it continues to focus on the lives of Mabel, Joan and Dot as they go about their lives working on the railways during WW2. In this latest novel, the girls are working just as hard, helping to keep the railway network running, but with the effects of war biting ever harder, the women need to pull together even more. The support that each of the women give to each other is what makes this series so special.
There's a lovely familiar feel to the story, and returning to Manchester, in 1941, is like coming home, especially as we have grown to love and admire both the stoicism and northern good humour of this group. Meeting again with Mabel, Joan and Dot is just such a delight, especially, as in this novel, we look more at their personal relationships, and with a hint of love and marriage on the horizon for one of the characters, it shows off the wonderfully warm camaraderie which has developed between these lovely women. Simple survival on the home front is very much in evidence and the author writes with a lovely light touch, showing what life was like during the early years of the war when our towns and cities were a target for German bombers.
There's a great deal of research needed to maintain a successful historical series and the author does a great job at bringing wartime Manchester to life. Like all towns, Manchester had its share of war time tragedy and I think this stoicism in making do and mending is what comes across so beautifully in The Railway Girls in Love, as even on a bad day when things are going wrong for them, they simply get up, and with strength and humour, they carry on with their lives.
Whilst it is perfectly possible to read The Railway Girls in Love as a standalone saga, as with all series, it is better if you start at the beginning in order to appreciate this author's skillful ability to bring place and people alive, and enjoy getting to know, and love, The Railway Girls.
About the Author
Maisie Thomas was born and brought up in Manchester, which provides the location for her Railway Girls novels. She loves writing stories with strong female characters, set in times when women needed determination and vision to make their mark. The Railway Girls series is inspired by her great aunt Jessie, who worked as a railway clerk during the First World War. Maisie now lives on the beautiful North Wales coast with her railway enthusiast husband, Kevin, and their two rescue cats. They often enjoy holidays chugging up and down the UK’s heritage steam railways.
Twitter @MaisieThomas99 #RailwayGirlsinLove
@arrowpublishing 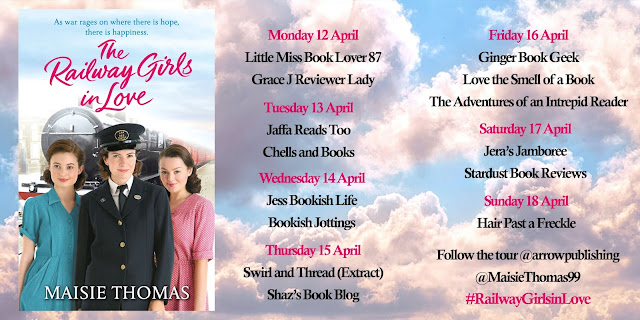