Lisa is running.
She has taken her child, Jack, and she has run from his father.
Lisa thinks she's safe.
She's found a remote house where no one will be able to find them.
Lisa is about to wake up in her worst nightmare.
And now she must face what she's tried to escape.
Risking everything to protect her little boy, Lisa knows that in order to survive she will have to fight, but it's hard to face someone you loved, especially someone you still love, who knows who you really are - and what you are really capable of.
Family is everything. What would you do to protect it?
📖  My Thoughts...
This fast paced contemporary psychological thriller hits the ground running with an opening chapter which sets the seal for a terrifying story which is cleverly split between time frames which are quite simply explained as now and before. In both sections we get to know Lisa who is caring for her boy, Jack, in an atmosphere which is fraught with danger. With little option, but to get to a place of safety, Lisa must go away with Jack in order to stop the abuse which threatens to engulf both of them.
This deadly spiral of domestic abuse is, at times, a gripping and uncomfortable read but the author does a great job of making everything seem really plausible and so scarily realistic that these characters could, so easily, be people you meet in your daily life. Such is the sympathetic rendering of the story that it becomes very easy to make an emotional connection with the main characters and even though the story is fraught with danger and dreadful abuse, there's a compulsion to read on just to make sense of the many twists and turns which this talented author has inserted into the plot. I was genuinely surprised with how the story eventually played out.
What I Did is a clever psychological thriller which grabs your attention from the start and doesn't let you escape until the whole of this compelling story is told.
📖  About the Author 📖
Kate Bradley worked for many years managing service for people who are marginalised by society; her world has taken her into prisons, metal health hospitals and alongside the homeless. She currently works in education. He holds a first class degree in English Literature, in addition to qualifications in creative writing and teaching. Kate lives in a small coastal town just outside Brighton with her husband and sons.
Twitter @kate_bradley #WhatIDid
@ZaffreBooks 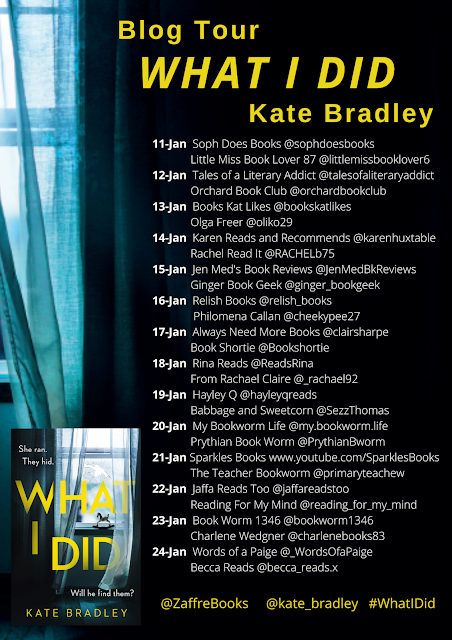