Delighted to share my book review on today's blog tour

Hare's Landing, West Cork. A house full of mystery...
Rachel Lambert leaves London afraid for her personal safety and determined to uncover the truth behind the sudden death of a homeless man with links to a country house hotel called Hare's Landing.
New York-based crime reporter Caroline Kelly's career is threatened by a lawsuit and she needs some thinking space away from her job. But almost as soon as she arrives, Hare's Landing begins to reveal its own stories - a 30-year-old missing person's case and the mysterious death of the hotel's former owner.
As Rachel and Caroline join forces, it becomes clear that their investigations are intertwined - and that there is nothing more dangerous than the truth...
My Thoughts..
The intriguing opening chapter of The Dark Room sets the scene for a convoluted mystery which has all the elements of surprise needed to keep you guessing.
In London, a homeless man, known only as Alfie Bows, is found dead in mysterious circumstances, and not only does this bode ill for those who have been filming his life in a documentary but it also puts into danger the lives of two women when they each visit the mysterious Hare's Landing, a hotel  in West Cork. Hare's Landing is a place of secrets and the brooding nature of the hotel, and the distrustful nature of those around it, all help to maintain this illusion throughout the story.
The two female protagonists each have their own reasons for being at Hare's Landing. After some unsettling disturbances, Rachel Lambert flees her home in London determined to investigate more about Alfie Bows and his connection to Hare's Landing. Meanwhile New York journalist Caroline Kelly has returned to her native Ireland in order to re-think her career and is little prepared for what she gets involved in whilst staying at Hare's Landing. The brooding nature of Hare's Landing is maintained throughout and as Rachel and Caroline become more and more involved in a missing person mystery so the tension starts to build up.
The author writes well and brings a nice air of mystery without becoming too fanciful. I was intrigued by Hare's Landing, it's such a gloomy old place, and so well described that it very easily becomes another character in the plot and an integral part of the story.
The Dark Room is an intriguing and mysterious thriller with enough twists, turns and red herrings to keep you turning the pages.
About the Author 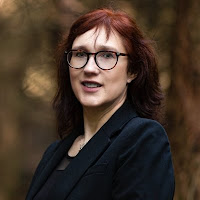 Sam Blake is a pseudonym for Vanessa Fox O'Loughlin, the founder of The Inkwell Group publishing consultancy and the hugely popular national writing resources website Writing.ie. She is Ireland's leading literary scout and has assisted many award-winning and bestselling authors to publication. As Sam Blake, she has written four previous novels and has topped the Irish bestseller chart.
Twitter @SamBlakeBooks #TheDarkRoom
@CorvusBooks
@RandomTTours 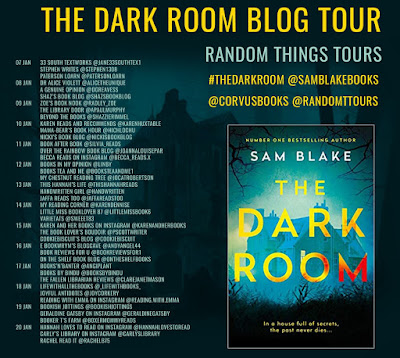