Blog Tour ~ The Weight of Small Things by Julie Lancaster


Delighted to host today's stop on this Blog Tour

One day she hopes to design the perfect gate - a gate to keep the bad things out.

Little does she know that the bad things have already got in.

Now her mother is dead, and the only other person with a house key has disappeared.

Frankie thinks she knows who it is. But first she has to prove it.

A delicately brutal exploration of what lies behind closed doors, and of the secrets and lies that form the fabric of every family, The Weight of Small Things is as charming as it is chilling.


I've never thought too much about gates other than a means to an end. You open the gate, walk through, then close the gate behind you, but for nine-year-old Frankie Appleton gates are very important indeed. They keep the bad things out and believe me there are more than enough bad things to be locking out of Frankie's life. Frankie is being roughly brought up by an indifferent mother who has more than enough mental health issues without, as Peggy sees it, the added burden of bringing up a child who, quite frankly, irritates the life out of her, and it is this challenging upbringing which makes Frankie's story all the more poignant.

Told in Frankie's remarkably mature voice, an emerging story of neglect, indifference and the trauma of loss comes through loud and clear. And yet, this is not just Frankie's story, it's also about Frankie's mother, Peggy and her troubled relationships with men, and Stella who has a connection to both Peggy and Frankie which is revealed as the story progresses. All three are strong and forceful  characters, and yet, throughout it all, it is Frankie who gives the story its heart and soul.

The Weight of Small Things puts under the literary microscope three lives which have been changed irrevocably by the tragedy of circumstance. Making the wrong decisions with the wrong men and simply being in the wrong place at the wrong time all have an impact on the way both Peggy and Stella deal with the hand that fate has given them. Frankie has her own share of angst but her remarkable ability to see the quirky aspects of life, make her such a fascinating little character, and someone who stays with you long after the story is finished.

Whilst the book is more or less a sort of whodunit, there are lots of other aspects to the story which make it more than just your average murder/mystery. I particularly enjoyed how the story flipped around in time, sometimes back in 1979 with Peggy's back-ground story and then jumping forward to be with Frankie  and occasionally, with Stella, in 1988/1989.

At times tragic, with desperation never very far away, The Weight of Small Things tugs away at your heart strings, and even though parts of it are really quite bleak in places, the absolute strength of the novel comes in the author's ability to make us smile throughout some of the more troubling parts.  It's a great debut by a talented author and I look forward to seeing what she gives us next time.

The Weight of Small Things EBook - which is released on 28th May - is currently running at 99p for the next couple of weeks to celebrate the blog tour!

Grab a copy while you can !! 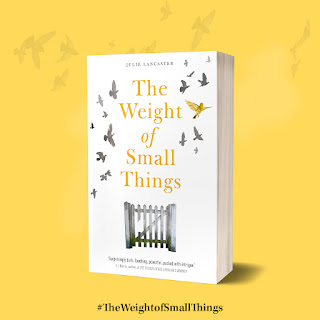 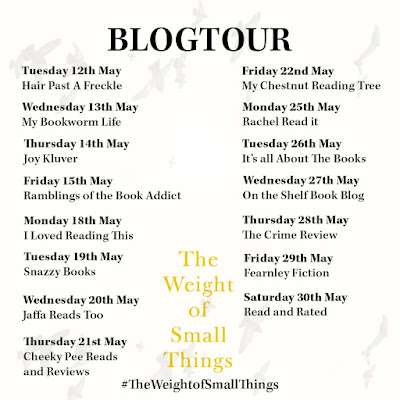