Thrilled to be part of this Blog Tour

Flo Canning’s heart is beyond repair following the news that she has been dreading since the outbreak of war. As Flo throws herself into the role of fabric manager at Liberty’s, old and new friends alike help pull her from a whirl of despair.

Between work and home life there’s plenty to keep Flo occupied. Not least new deputy store manager, Henry Masters, whose arrival has consequences that Flo and her workmates could never have foreseen.

But there is more tragedy still to come, and Flo and her friends will need each other more than ever if they are to survive the uncertainty ahead.

Those who have read the first two books in this series will find a welcome return to the Liberty Girls, those strong and determined characters, who have been such an integral part of this historical saga. Set amongst the splendour of the Liberty's store in London, this story follows the trials and tribulations of the girls as they seek to keep the store profitable during the eventful war years. Of course, it's not all about the store and salesmanship, it's also the personal interest stories which make this series so enjoyable.

I have especially enjoyed reading Flo's story in this novel. Her sadness at the beginning of the book is sensitively explained, and her role as the manager of the Liberty's fabric department is not without its challenges, however, Flo has some difficult choices to make, not just in her professional life as part of the management of this fine London store, but also in her personal life. The introduction of new characters adds an interesting dimension to the story and enhances the enjoyment.

The author certainly knows how to bring everything to life and her detailed description of life in wartime London along with the personal tragedies and heartbreak show a poignant side of life, and yet, there are also the small triumphs and happy moments which really help to create a lovely authentic atmosphere.

Beautifully written, with down to earth characters and a genuine warmth, Wartime at Liberty's has that little bit of something extra which will appeal to loyal fans of this author, or equally, if you are new to the series it can be read as a standalone story.

Fiona Ford is the author of the Liberty Girls series, which is set in London during the Second World War. Fiona spent many years as a journalist writing for women’s weekly and monthly magazines. She has written two novels under the pseudonym, Fiona Harrison, as well as two sagas in her own name in the Spark Girls series. Fiona lives in Berkshire with her partner. 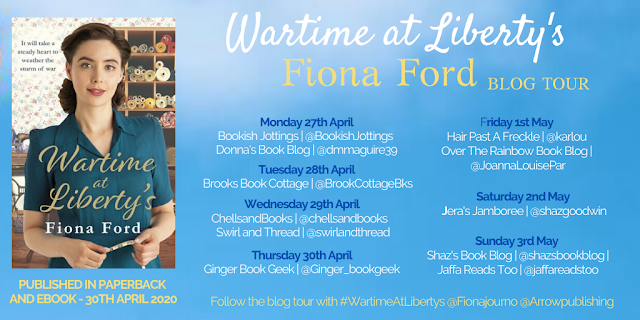