Released exclusively in audio on 7th May 2020, Red Desert is a white-knuckle suspense thriller set between London, Berlin and Iraq. Perfect listening for fans of Homeland, The Hurt Locker and American Sniper, Red Desert is available to here. Red Desert will be available for 1 credit to Audible members or priced at £14.99 for non-members


Desperate to escape the past, Tom swaps a safe life in London for a spell in the desert of Iraq, providing therapy to the staff of an isolated oil concession. But his new job quickly becomes dangerous, especially when he starts to ask too many questions about a series of deaths. A lethal attack on the camp sends him back to the UK, but he’s determined to keep investigating. Iraq is coming home with him, in more ways than one.

Arriving at the isolated oil field in Iraq should have provided psychotherapist, Tom with  a more settled haven than the life he has left behind in London, but as Tom finds to his cost that not everyone at the oil camp wants him there. Drawing on his professional background doesn't really help Tom when a series of mysterious and unexplained deaths on the camp seem to escalate, with disastrous consequences for Tom and those around him.

Inexorably Tom gets drawn further and further into a dark and deadly mystery will will see him in danger of his life on more than one occasion, and as a consequence, in the pursuit of justice, Tom will be forced to make some very tough decisions.

The author writes very well and brings a strong authentic feel to the story, particularly in the description of life in the Iraqi desert, the stultifying heat, the general air of mistrust between those who live on the camp, and the inherent and creeping sense of danger which seems to seep into the heat and dust of this arid landscape. There's plenty of excitement throughout, in fact, the tension is racked up to high for most of the novel, with some genuine thrilling moments, which had me literally unable to break away for fear of missing something vitally important to the outcome of the story. I enjoyed the different scenarios and moving between Iraq, London and Berlin guaranteed that there was always something different to absorb and consider.

I've listened to several Audible Originals and I am always drawn by the high standard of story telling, not just from the book itself, and it must be said that Red Desert had me on the edge of my seat on more than one occasion, but also by the high standard of narration, something which is so vitally important  in audio books. Many times I have given up on an audio book because the narration was a hindrance rather than a help, however, not so with Red Desert which is expertly narrated by Joe Jameson whose command of the story is exemplary. he brings each of the characters to life in a very special way.

Red Desert is a fast action, high octane suspense thriller which grabbed my attention from beginning to end.

Paddy Magrane is a Psychotherapist, journalist and the Kindle #1 ranked thriller writer of The Sam Keddie thrillers. Born in the Middle East, Paddy then grew up on army bases in Germany, Northern Ireland and England. Paddy was an artist for ten years in the UK before working as a journalist for The Guardian, The Observer and The Telegraph. Paddy has travelled extensively, having visited Syria before the civil war and recently worked in Israel and the West Bank. In 2006, Paddy retrained as a psychotherapist and practices at home in rural Devon where he lives with his wife and two daughters. 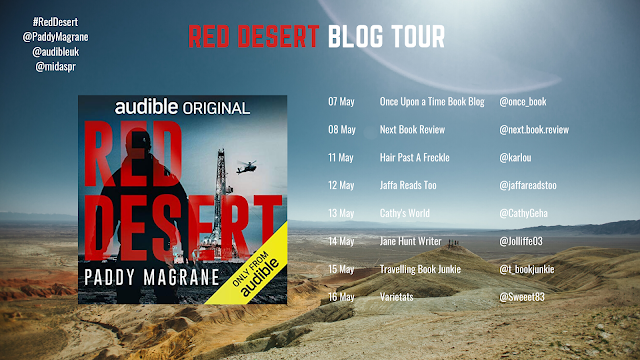