The first novel in the utterly brilliant Railway Girls series.
Perfect for fans of Nancy Revell and Ellie Dean.

In February, 1922, at the western-most entrance to Victoria Station in Manchester, a massive plaque was unveiled. Beneath a vast tiled map showing the lines of the Lancashire and Yorkshire Railway network, a series of seven bronze panels recorded the names of the men of the Lancashire and Yorkshire Railway who gave their lives for King and Country in the Great War – a total of 1,460 names.

In March, 1940, a group of women of varying ages and backgrounds, stand in front of the memorial, ready to do their bit in this new World War...

It's always exciting to be in right at the beginning of a new historical saga and to have one set in the north west is especially heartwarming as many of the places mentioned in The Railway Girls are places I am familiar with, in fact, like one of the characters in the book, my own grandfather worked on the northern Railways.

The story starts in 1940 when the country is already in the grip of war. All those industries which once relied on manpower, now find that it is the women folk who have to keep the country together, from working in heavy industrial factories making ammunition, to keeping the canals and railways functioning, women were very much in charge of keeping the home fires burning. However, this didn't always sit comfortably with those men who stayed at home, and there was often resentment and bullying  towards the female workforce.

The eponymous railways girls are pulled from all walks of life, from the posh girls with plummy accents, to the rough and ready northern housewives, there is a real mix of personalities and I think that's what really works as right from the start the women who are brought together to work on the LMS railway network do so with a sense of excitement, trepidation and pure northern grit.

Some characters I liked more than others and some I wanted to give a good telling off to, but throughout it all I sensed that this disparate group were going to get on like a house on fire. I especially enjoyed when the women all met up after their shifts to share their problems over a cup of tea in the station tearoom. However, it's not all about gossiping over a teacup, there's plenty more going on, and I enjoyed how the author gave attention to each of the characters so that we got to know more about them, not just the roles they played on the railways ,but also their, very different, home circumstances.

The Railway Girls brings this wartime period alive in a beautifully written historical saga and the author uses her own local knowledge of the area to really bring everything alive in the imagination. Whether it be observing the hard graft of physical labour on the LMS network, or typing invoices in the clerks' office, or waltzing in the Manchester dance halls, there is never a moment when the personality of the railway girls, or the sense of historical authenticity doesn't shine through.

It's been a real pleasure to spend time with the intrepid railways girls and I am already looking forward to finding out just what happens next to them all.

Maisie Thomas was born and brought up in Manchester, which provides the location for her Railway Girls novels. She loves writing stories with strong female characters, set in times when women needed determination and vision to make their mark. The Railway Girls series is inspired by her great Aunt Jessie, who worked as a railway clerk during the First World War. Maisie now lives in beautiful North Wales with her railway enthusiast husband and their two rescue cats. They often enjoy holidays chugging up and down the UK’s heritage steam railways. 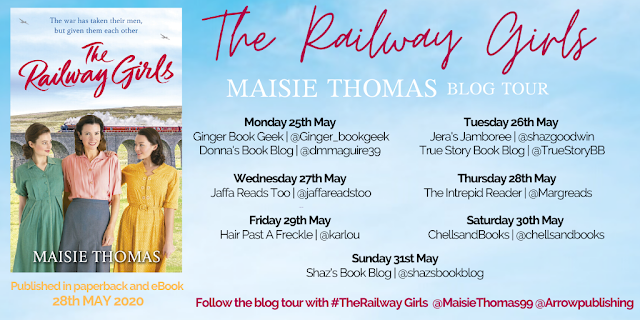