When lawyer Finn Fitzpatrick is approached by a man to investigate the death of his daughter, her first instinct is to refuse. And yet something about his story draws her in.

Why did a bright, confident, beautiful young girl suddenly drop out of school, isolating herself from everyone who cared about her?

The deeper Finn goes into the case, the darker and more twisted the picture becomes.

Because these are powerful people she is trying to expose. And they will stop at nothing to protect their secrets.

Finn Fitzpatrick is a solicitor in the city of Cork, one stormy evening, just as she is leaving her office, she is approached by an elderly man who asks for Finn's helping in searching out the truth about what happened to his daughter, Deirdre. At first Finn is reluctant to take on the investigation but something about Sean Carney's story appeals to her sense of justice.

What then follows is an investigation which takes Finn into some dark and dangerous places and the more she uncovers about one person in particular the more she become embroiled in uncovering dark secrets which have been covered up by someone who was in a position of great trust.

Initially I found the story a little slow and it took me a while to feel comfortable with the characters, particularly Finn, who took some getting used to, but then about half way through the story starts to really take off and it becomes a much more interesting read.

As with all first stories in a proposed new series there is a certain amount of scene setting and getting to know the people and places. I think that setting the story in Cork is a great idea as the author seems to know the area well, and even though I am not familiar with the city, thanks to the author's detailed descriptions I was able to picture the streets and the other places which draw Finn into this complicated investigation. The story itself tackles a difficulty subject and in light of the #MeToo movement is particularly relevant.

Darkest Truth gets the series off to a good start.

Catherine Kirwan grew up on a farm in the parish of Fews in County Waterford. She studied law at UCC and lives in Cork where she works as a solicitor. Darkest Truth is her first novel. 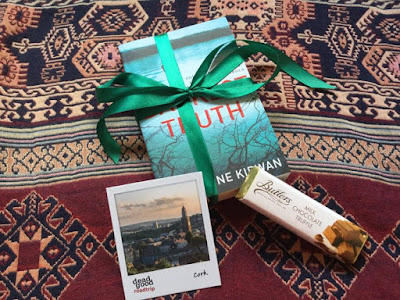