Blog Tour ~ Through the Wall by Caroline Corcoran

✨Delighted to be part of this blog tour ✨

Lexie loves her home. She feels safe and secure in it – and loved, thanks to her boyfriend Tom.

But recently, something’s not been quite right. A book out of place. A wardrobe door left open. A set of keys going missing…

Tom thinks Lexie’s going mad – but then, he’s away more often than he’s at home nowadays, so he wouldn’t understand.

The prologue gives an enticing look into the life of one of our main characters but the identity of this character is quite ambiguous and it's only as the story starts to evolve that we being to realise the significance of this opening chapter.

This novel goes on to show that you are never really sure of your neighbours, on the surface they could be perfectly ordinary people, and yet underneath the facade something decidedly odd is going on. For Lexie and her boyfriend, Tom, their life is about to be turned upside down but, at first, they have no idea who is playing with their lives. Harriet lives in the apartment adjoining Tom and Lexie's and whilst they don't have anything in common, their lives overlap in a truly creepy sort of way.

The story gets off to something of a slow start which I feel is quite deliberate as it takes time for each of the main characters to reveal their true selves. I found the premise of the story really interesting especially the individual chapters which are narrated in turn by both Lexie and Harriet who are aware of each other through the walls of their respective apartments, and yet their lives couldn't be more different.  There is a genuine creepiness to the story which builds up gradually and the overall feeling of suspicion soon takes over so that you are never really sure of who is being entirely truthful.

The author has written a perceptive debut novel which looks at the minutiae of  two very different lives however it is these very differences which make Through the Wall such a suspenseful psychological thriller.

Caroline Corcoran is an author, journalist and copywriter with over 15 years experience writing and editing words in various guises. Through the wall is her debut novel. 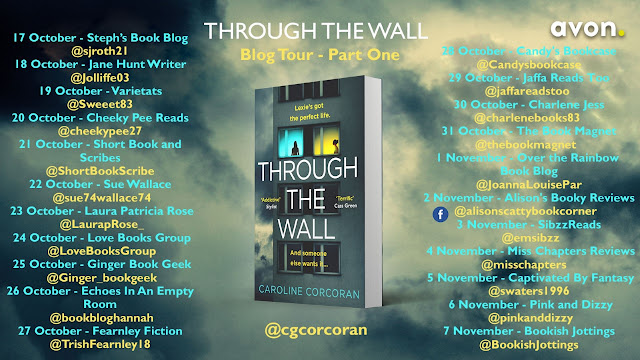