Blog Tour ~ The Wolves of Leninsky Prospekt by Sarah Armstrong

Jaffareadstoo is delighted to host today's final stop on the

It’s 1973 and Martha has been sent down from Cambridge for distributing left-wing leaflets and doing no work. To escape parental disapproval, she marries her friend Kit, posted to Moscow by the diplomatic service. Kit is gay, but having a wife could keep him safe. In Moscow, Martha struggles to make sense of a difficult but fascinating new world.

Who can she trust? Who can she even talk to? She takes Russian lessons, makes the wrong friends, becomes familiar with a strange and wonderful city, and unwittingly becomes a spy.


Martha is a bit of a free spirit and when she returns home after being sent down from Cambridge her parents don't really know what to do with her. Martha solves the problem by marrying her gay friend Kit and travelling with him to Moscow. That this marriage is one of convenience suits both Martha and Kit, however, Martha finds out, to her cost, that life in Russia is very different from being in England. Her natural excitement at being in such a wonderful, but rather strange, country is hampered by the political and social restrictions which, even as a married woman, are placed upon her.

Spending time in Moscow with Martha in the Russia of the 1970s, when this story is set, is enlightening as not only does the shadier side of life emerge, but also the references of living in a place where everyone is under suspicion comes across in a story, by a different narrator, which runs like a thread throughout, and which explains the analogy to the wolves of Leninsky Prospekt.

The Wolves of Leninsky Prospekt is an interesting read and the author has done a good job of recreating this mysterious time in Russian history. There was a nice sense of time and place and I especially enjoyed reading of Martha’s exploration of the parks and woods of the city and of her dealings with some of the more shady characters who flit into and out of the story. That some of these characters aren't particularly likeable helps to add an uncomfortable atmosphere, to what is, in effect, quite a cautionary story about a bygone world.

Sarah Armstrong is the author of The Insect Rosary (‘a brave debut’- Anne Goodwin) and The Devil in the Snow (‘an intriguing and compelling story – Liz Trenow). Her short stories have been published in magazines and anthologies, and she teaches undergraduate and postgraduate creative writing with the Open University. Sarah lives in Colchester with her husband and four children. 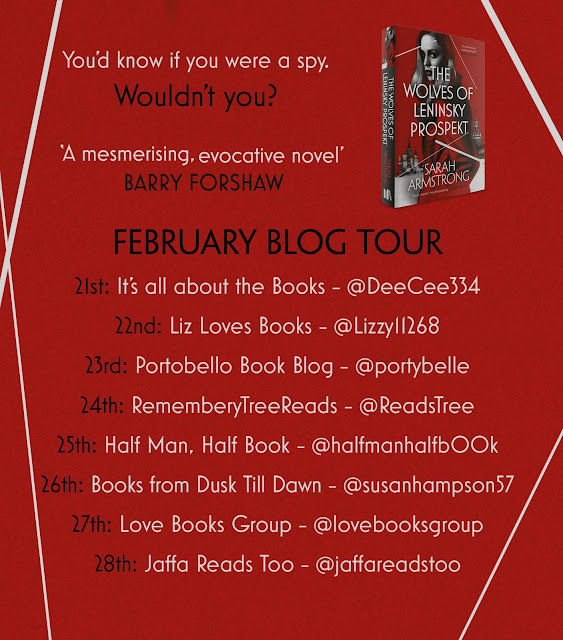