Blog Tour ~ A Version of the Truth by B P Walter

We all see what we want to see…

2019: Julianne is preparing a family dinner when her son comes to her and says he’s found something on his iPad. Something so terrible, it will turn Julianne’s world into a nightmare and make her question everything about her marriage and what type of man her husband is or is pretending to be.

1990: Holly is a fresher student at Oxford University. Out of her depth and nervous about her surroundings, she falls into an uneasy friendship with a group of older students from the upper echelons of society and begins to develop feelings for one in particular. He’s confident, quiet, attractive and seems to like her too. But as the year progresses, her friends’ behaviour grows steadily more disconcerting and Holly begins to realise she might just be a disposable pawn in a very sinister game.


When Julianne's son finds something disturbing on the family computer, it alters the course of their family life forever as the story reveals not just what is going on in the here and now but also goes back to Oxford University in the 1990s when both Julianne and her husband James were students there.

A Version of the Truth is a very complex psychological suspense drama as not only does the story in the present develop in a sinister way but also, Holly, our narrator in the 1990s, reveals a really dark chain of events, the consequences of which will have repercussions for years.

The hedonistic days of the 1990s, with a group of young people who have no moral compass, and no thought for anything other than their own perverted pleasures, starts to come alive. What then follows is an uncomfortable story which takes the reader through a chain of events which makes for disturbing reading. I’ve got to say that I found most of the characters really unlikable and their behaviour difficult to read, however, it is to the author’s credit that these people, with so few redeeming qualities, make for such compulsive reading.

A Version of the Truth is a difficult book to enjoy as it covers some really dark topics which won’t be to everyone’s taste; however, I thought that the author has done a great job of making such despicable characters, and such awful behaviour, into something so compellingly readable.

B P Walter works as a social media co-ordinator for Waterstones, based at their HQ in Piccadilly. A Version of the Truth is his debut novel. 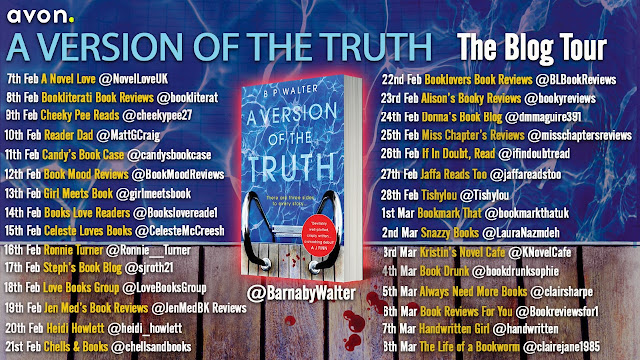