🎄 Review ~ Around the World in 80 Words by Paul Anthony Jones

From Monte Carlo to Shanghai, Bikini to Samarra, Around the World in 80 Words is a whimsical voyage through the far-flung reaches of the English language.

Reading is always an adventure and, in Around the World in 80 Words, the adventure starts in London with a journey through the English language. Taking us from the derivation of the term, "Kent Street Ejectment", which I have to admit I hadn't heard of, but maybe Londoners have 😊, through to being sent to Coventry, this absorbing etymological exploration, is a cornucopia of fascinating detail.

Like all readers, I have a curiosity with words, not just in speech and modern fiction, but also in the way our language has evolved, and of the diversity of the origins of words in our shared language.

This is one of those engrossing compilations which is easy to dip into and out of, picking a country or a word and then just letting the beauty of both, and the exemplary research, take you into the fascinating and complicated world of the English language.

Eighty stops, from London, to the Vire region of France, the source of the word Vaudeville, through to Belgium, Germany, the Netherlands and all parts of Eastern Europe, from Colombo in Sri Lanka, home of Serendipity, to the Brazil nuts of Rio de Janeiro, there is such a wealth of information, not just about the words we have purloined from so many different cultures, but also in the way their use has changed and evolved over time. 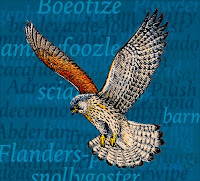