Drew Neary became interested in history, science fiction/fantasy and conspiracy theories in his teenage years. This prompted him to write short stories over the years. He is also a fan of tabletop gaming.

Ceri Williams has always loved language, and after a 5 year stint in advertising and journalism, now writes supernatural horror and fantasy. The Clockmaker is their first book and forms part of an upcoming series.

Priscila Rodriguez was born in Mexico City, 1974 and now resides in The Netherlands since 1998.

A huge welcome to you all. Thank you for being our guests today.

Tell us a little about yourselves and how you got started?

We met in a writers’ forum and quickly realised that our interests and approaches to writing were very similar. As we live close to each other we met for a coffee and began discussing a photograph that we had seen online. Before we knew it several hours had passed and we had outlined an exciting epic storyline that we knew had to be written.

"This is the first time we are co-writing and we are really excited about how dynamic our partnership is. It was evident from our initial meetings and the snowballing of ideas which evolved into the journey, that we absolutely had to write this novel, and which subsequently forms the basis for the books that will follow." 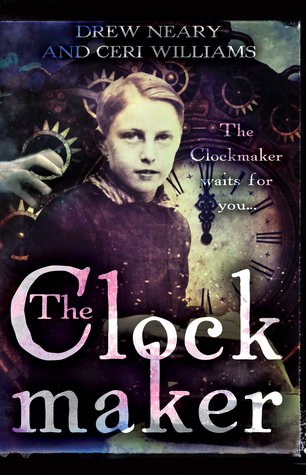 What’s the book about?

The story is about a little child, Duncan and his mother, Annette, who are moving to his father's ancestral place in Scotland. Here they plan to start a lodging service to escape the devastation of the London blitz and heal the scars left by the death of Duncan's father in WW2.

On their train journey to Scotland they briefly meet a man whom they later find in their own village as a guest in their lodge. This man known only as The Clockmaker who escaped from Hilter’s bunker is much more than meets the eye. Who is this mystery man and does he have any role in the many strange things that begin to happen in this little Scottish village?

“I enjoyed this book. It has some gothic, is a bit historical, has some supernatural and a touch (but only a touch) of horror. This is not a blood, guts and gore book but a clever unravelling of a story where the human characters are not the most unnerving.”

As writers based in the North, does this present any problems in terms of marketing and promoting your books and if so, how do you overcome them?

Drew splits his time between the North and the Midlands where his children are based.

In terms of marketing and promotion we will obviously try and get promoted everywhere in the UK and abroad (we have books on shelves in Europe for example). However we found a great deal of support from our communities up north and the first Waterstones to stock our books were actually Northern branches.

In terms of radio and TV interviews you have to be prepared to travel as you do for book signings and literary festivals etc. We were interviewed in Bournemouth recently for example but we love doing it and consider it a healthy part of the job. We are still quite new to this but we find social media is an invaluable tool to promote and market our work and a wonderful way to meet new readers, which is one of the joys of being an author.

The book starts off in Newcastle where Drew hails from and so all of the places mentioned are a significant part of his youth. Two of the characters are based on his grand parents, and the young girl is his mum. It was an opportunity to celebrate the lives of real people who fitted the timeline of the book, which is post WW2, and it fits with the storyline. Drew’s grandfather was:

“A WW2 veteran, who had so many amazing stories about his war experiences and yet he told them to us young ones in a way that wasn’t terrifying- it was entrancing. He earned a box full of medals (one from El Alamein) that are now the treasured possessions of my son.”

This involvement of real people in the novel was something that hopefully the reader engages with. Drew wanted people to know what his grandfather was like.

The main body of the novel is set in Balomoral in the Scottish highlands, in the fictitious village of Lochnagar. Western Scotland is a beautiful country dotted with little villages, standing stones, mountains, lochs and mists that whisper of ancient secrets and hidden ancient powers waiting to be re- discovered. Powers which the clockmaker seeks to unlock. We felt it important to visit several places in Scotland so as to ensure we got the soul of the country in our words.

“One of the most well-written books I've read in a while. The setting development cannot be beat and you actually are placed dead in the centre of every scene.” David Kaiser

It is the people above all. All those we grew up with in the North-friends, neighbours and family. It is hard to imagine a warmer, friendlier, positive group of people with an awesome sense of humour and a great outlook on the joys of living.

The north has some wonderful cities such as Newcastle, Liverpool, Manchester, and Chester. All of these cities have given so much to not just the UK but also the world in general. Music art, literature, sport, engineering to name just a few.

In addition you have beautiful countryside-which was part of the inspiration for the setting of the book.

We’re a little different as we co-write. We do write separately on occasion, but the most important aspects and content of the writing and novels come from us blending what we have written, discussions around ideas and next steps, and what we come up with when writing together. We have been asked whether it is difficult to write together, and our response has been not at all- in fact just the opposite.

When we are co-writing we are putting into words a dialogue we have with each other. Then we blend it in the editing process. So it reads as though one person has written it. Readers of our book cannot tell which parts have been written by either of us. Editing together is vital, it allows us to discuss what needs to be changed and or developed.

Drew: “I’m definitely not a loner, I much prefer the company of people, admittedly when you are writing you have to get the words n the page which is solitary one man job; but I write with music, or the radio on and I talk over scenes in my head, so I don’t feel like I am alone. But also when I have written some pages, I talk them over with my children and ask them what they think. My son in particular will always ask what happens next-and this spurs me to write .He is very good at giving feedback and thinking of other scenarios.”

If we cannot physically write together, a really successful method has been sending each other the writing via email and then discussing this, or we just ring up and have a chat.

We find that we have a very strong respect for each other’s ideas and thoughts, and as a result this respect leads to a meshing of quality text.

We use social media extensively to promote our novel, and in the process have linked up with other authors.

We have held signing events at local shops who carry copies of the book. We contacted local and regional library services and are now stocked in several and are currently waiting for confirmation of author events.

Drew attended a local reading group who were reading The Clockmaker, and the response from them was wonderful (they even made a cake) and several of them put it their top 3 books of the year.

What can you tell us about your latest books?

We are currently writing two books, as The Clockmaker is part of an upcoming series. Optics is the prequel and The Perfect Child is the sequel.

Is a semi dystopian novel set in the future but jumps backwards and forwards through time, and this is where The Clockmaker first appears. Many of the genres evident in The Clockmaker are within the novel, although there is a strong sci -fi element throughout.

Through the sins of mankind The Beast grew in power and was thus able to slay God. Mankind is spread through the stars but a sentient artifact from the past is discovered by the heroes- Judd and Walden who are escapees from the shackles of The Great machine. This artifact leads the heroes down on a fraught and mysterious journey to restore the balance between good and evil and attempt the impossible -and bring God back.

Continues the journey started by Annette and Duncan in The Clockmaker. Spanning 3 centuries, the protagonists are brought together for one final time. Set in Nottingham primarily, it is a gothic thriller with elements of the supernatural and horror.

Priscila Rodriguez was Born in Mexico City, 1974 and now resides in The Netherlands since 1998.
She graduated from the Academy of Fine Arts in Utrecht in 2006 with a specialty in Intermedia and Photography and has also studies in History and Graphic Design, currently she works in developing her own photographic techniques, in which she combines digital and three dimensional elements.

She started working with the classical forms of drawing and painting until she soon discovered the magic of antique photographs and old papers left behind in flee markets, which she has been obsessively collecting for more than a decade. The fascination for the old and the forgotten are the key elements to her work and the stories she tells.

Among exhibitions in Mexico and in The Netherlands, she has also collaborated in publications. The Clockmaker is her first book cover.

The atmosphere of the novel and the nature of her "time based" visuality gives to this title the perfect match.

For more of her work, visit:  http://www.allthingslostonearth.com/

Drew and Ceri on Twitter@stepford115